Other GamePeople columnists have reviewed this from their perspective - huh?:
Story Gamer (DS)
Family Gamer (360) 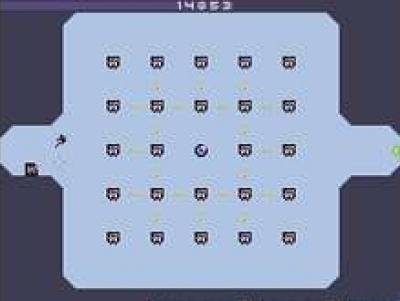 n+ is one of the first popular web games to hit the DS. Something of an online phenomenon, it started life as N on PC's web browsers before being released as n+ 360. The circle is now squared with its release on PSP and (the game in hand today) DS.

Character control and movement is unique in n+. Whereas the likes of Mario has some degree of momentum, n+ provides a protagonist with exaggerated physical traits. At first his floaty movement seems a little bizarre and un-lifelike. But as you learn to control his runs, jumps and grabs there is a real sense of movement about the play. Each level dictates a certain series of jumps or slides to navigate and you soon develop a rise and fall befitting of any ballroom.

The controls are kept simple. You move left and right with the D-pad, jump with one button and self destruct with another. Whereas the PSP and n+ 360 version enable you to zoom into a part of the screen, on the DS you also have the level map on the second screen. It's a setup that works well, and makes the most of the DS's diminutive graphical power.

The basic premise stays the same throughout, get to the switch to open the door then get to the door to exit the level. Oh and along the way make sure you don't die or run out of time. Dying usually involves touching a red explosive mine, or being shot, zapped or blown up by one of the blue sentinels. Time can be extended by collecting the yellow time cubes, each one adding precious seconds to your total.

The enjoyment is left to the inspired level design and delightful character physics. As in the rest of the game - from menus to loading screens to the sound - anything extraneous to the singular experience of man and platform has been stripped away.

The whole experience is wrapped up in an aesthetic that falls somewhere between Portal 360's white washed laboratory walls and the club flyer minimalism of Wipeout: Pure PSP. The muted palette is only broadened by climactic events - missiles firing, bombs exploding and limbs flying off after a death fall.

Levels, when played correctly, can be completed in a few minutes. However, working out how you need to tackle it can literally take half an hour. We often talk about games that beg one more play, but this has never been more true than here. Case in point, where we would usual bellow our frustration and walk off after being perplexed by a tricky level, we found ourselves playing some episodes more than 50 times in one sitting - happily lost in our efforts to get to the next brain stretching stage.

Despite its cartoon style, this is really a game for intermediate and expert players. The DS version does apply a much more relaxed difficulty curve, taking a good few hours before things get really tricky. But it is the later levels that players get to grips with the real essence of the game - brain melding complexity and pixel perfect jumps.

Younger players may find the limb severing explosions a little much to bear (even though they are in black and white silhouette). The sheet dexterity required will also mean that all but the first few levels are likely to be off limits.

You can support Andy by buying n+