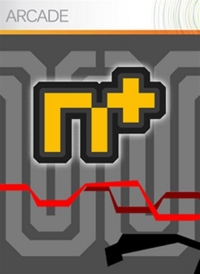 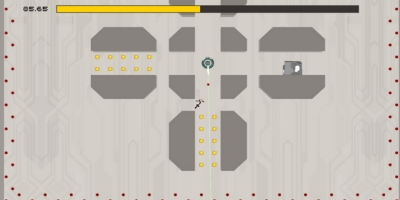 You may think platform games these days are all about inventing new interactions, about gorgeous high polygon interactions and about complex puzzles. These things are in the mix for sure, but it's not until you encounter the streamlined restrained experience of the likes of n+ that you really start to understand the attraction of these types of games.

With n+'s imminent arrival on DS and PSP after a sparkling success on the 360, we thought it was high time to revisit this classic platform game. n+ DS has had some sensible tweaks to difficulty to suite the more casual market, and some graphical clean up for its smaller screens. Each version includes both a level editor mode and impressive multiplayer action. But enough of the trivialities, let's dig into the game proper.

Whereas platform games of yore suffered technical limitations that made them limit the complexity and variety in their experiences, modern games pretty much have a free hand (even on the DS and PSP) to do what they want. The genius of n+ is that it reintroduces restraint as a matter of design. They opt to limit themselves to a basic palette of walls, enemies and character abilities - but then they take these elements and combine them in ever more creative and imaginative episodes.

The basic premise stays the same throughout, get to the switch to open the door then get to the door to exit the level. Oh and along the way make sure you don't die or run out of time. Dying usually involves touching a red explosive mine, or being shot, zapped or blown up by one of the blue sentinels. Time can be extended by collecting the yellow time cubes, each one adding precious seconds to your total.

Earlier levels present only minor challenges and you soon realise you can go through them pretty quickly. Then the challenge to replay the level, collecting all the time cubes and improving your time starts to draw you in. It's surprising how quickly you hone your ability to cope with each scenario thrown at you.

At first his floaty movement seems pretty bizarre and un-lifelike. But as you learn to control his runs, jumps and grabs there is a real sense of movement about the play.

This takes us onto the character controls. Now, we are used to the likes of Mario having some degree of momentum and physicality to his movements. But N provides a protagonist with exaggerated physical traits. At first his floaty movement seems pretty bizarre and un-lifelike. But as you learn to control his runs, jumps and grabs there is a real sense of movement about the play. Each level dictates a certain series of jumps or slides to navigate and you soon develop a rise and fall befitting of any ballroom.

The controls are kept simple. You move left and right with the left analogue stick, jump with one button and self destruct with another. The enjoyment is left to the inspired level design and delightful character physics. As in the rest of the game - from menus to loading screens to the sound - anything extraneous to the singular experience of man and platform has been stripped away.

The right stick enables you to move the camera around the level to view the action. Click it in and you gain access to three different levels of zoom. You soon find that some levels require the closer look provided from the more detailed camera view, whilst others benefit from a broad overview obtained from the pulled back position.

Before getting into the game proper you can work your way through the tutorial levels. These are a master class in user interaction - combining information and play much akin to the pop-up boxes of Super Mario Advance 2 (Super Mario World) GBA. The game then leads you through a series of episodes. Each one consists of five levels and (unless you get particularly stuck) should take around 5-10 minutes. These are both ideally paced and sub divided for the sort of casual play that a Live Arcade, game is likely to get.

n+'s strong sense of self and pitch perfect delivery embarrasses us into submission. This is a game that needs to be experienced rather than criticised.

The whole experience is wrapped up in an aesthetic that falls somewhere between Portal 360's white washed laboratory walls and the club flyer minimalism of Wipeout: Pure PSP. The muted palette is only broadened by climactic events - missiles firing, bombs exploding and limbs flying off after a death fall.

To criticise the game's design choices seems a bit like marking a painting down for having a strong sense of style. We could highlight the difficulty of determining how far you could fall before dying. We could suggest the achievements are a little stingy early on. We could state that much of this could be played for free on the flash version. We could, but we won't.

We could also talk, more positively and at length, about its online modes and user generated content. Two great bonus aspects of the game that say as much about the developer's commitment to delivering a rounded experience as anything else. But instead we have saved space and stayed focus on the core experience that makes this such a hard game to put down. Case in point, where we would usual bellow our frustration and walk after being perplexed by a tricky level, we found ourselves playing some episodes more than 50 times in one sitting - happily lost in our efforts to get to the next brain stretching stage.

Line Rider's recent release completes a journey that started on Web Browsers, came to the 360 and now finds its portable home on the PSP and DS. Throughout, n+'s strong sense of self and pitch perfect delivery proves persuasive. This is a game that needs to be experienced rather than criticised. Only when it has worked its charms on you can you really appreciate just what it is.

You can support Andy by buying n+