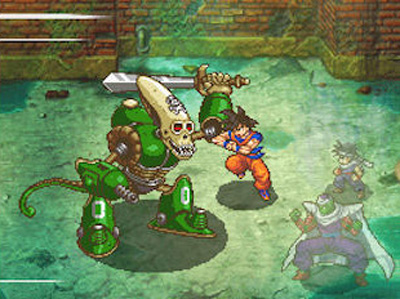 Revisiting the events of the anime and the manga, Dragonball Z: Attack of the Saiyans for the Nintendo DS, is one of the few forays into the Role-playing game territory for the Dragonball Z games. With entertaining and fast-paced battles, this is the perfect addition to the Dragonball series and gives fans the chance to follow the events of the original Dragonball Z story, battling as Goku and the Earth Defence Force to save the world from Vegeta and the Saiyan enemies. The fun side-quests and satisfying game modes give Attack of the Saiyans an accessible quality that both newcomers and long-term fans will love and enjoy.

Dragonball Z games usually keep to the brawling and fighting genre for their major releases, but Attack of the Saiyans for the Nintendo DS moves the series into the Role-playing arena with a retelling of the original Vegeta Saga. This lends itself well to the DS system and the game takes a very accessible approach with bite-sized dungeon crawling and some fun side-quests.

The pace of the game is nice and quick too, especially in the first half, and you'll find the chapters of the game's story zipping by with pleasurable ease. The basic levelling up mechanics of tradition RPGs have also been streamlined so you'll find yourself gaining levels quite quickly, leading to less grinding than with bigger and longer games. This makes the experience much more pleasant, especially if you want to concentrate on the story rather than ceaselessly trawl through long dungeons.

Perhaps the most satisfying part of Attack of the Saiyans is the battle system - rather appropriate considering the type of game Dragonball Z usually is. Though there are only a few characters to control the game makes up for this with an impressive array of combat options instead. Even a basic attack leads to an impressive display of fist-fighting, but there are also traditional attacks such as the Wolf Fang Fist that you can upgrade to. For the most powerful display of combat you can use the Ultimate Attacks - which are combinations of normal attacks that you instigate by having three party members use their full rage meters at the same time. These 'fever' attacks keep the combat highly interesting and also mean you're never in a particularly precarious position regarding boss fights.

This easier level of difficulty means the game is suited to a younger audience and the colourful visual art-style is also particularly appealing to children. But fans of the franchise and series will find much to enjoy here as well - the RPG trappings hold an interesting re-telling of the original story. Attack of the Saiyans also includes new material that hasn't been seen in either the anime or manga series making it a pretty compelling purchase for die-hard fans.

Coming to this game as a parent and casual fan I was pleased to see how accessible it was, both to me in terms of its story and also to my kids with its basic mechanics. It was a good introduction to the Dragonball Z series and the way the story was retold made the allure of the other Dragonball Z games as well as the anime and manga all the more compelling. It served as a great introduction to the RPG genre as well - the bright and colourful art-style helping to keep everyone's interest to the end of the game.

With its array of popular characters and familiar story, Dragonball Z: Attack of the Saiyans for the DS is a fantastic introduction to the Dragonball series. The easy, pick up and play mechanics and highly watchable visuals mean this is an excellent choice for kids, newcomers to the franchise and existing fans of the series.

You can support Jan by buying Dragonball Z: Attack of the Saiyans