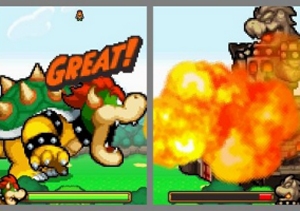 As Mario and Luigi: Bowser's Inside Story gets going, players are soon tapping along with text and visuals to get the gist of the story. A mysterious infection is taking over the Mushroom Kingdom which causes the Toads to inflate to massive proportions. To make matters worse, Mario and Luigi find themselves inhaled by a brainwashed, magically enhanced Bowser. So the scene is set, a double jeopardy scenario of escaping from Bowser and saving the kingdom from infection. Things get more bizarre and amusing from here - with both hilarious and perplexing results.

From the off the action takes a more platforming direction. In a similar way to the Nintendo Wii version of Paper Mario there is more to do in the way of running jumping and investigating. But it's not long before battles are encountered and proceedings include the more familiar turn based style.

These battles are essentially the same as the previous Mario and Luigi Nintendo DS adventure games. But here, Bowser is also a playable character. He fights alone, as opposed to the tag-teaming of Mario and Luigi, but is much stronger. Do well enough and, in a nod towards the Nintendo Kirby franchise, he can inhale his enemies. This enables Mario and Luigi - still lurking inside, to get in on the action and fight enemies from within.

Progress is measured by the return of Bros. Points from the first game, Mario and Luigi: Superstar Saga. This time around they are called Skill Points - to accommodate Bowser's playability we presume. A new ranking system enables players to level up and obtain more equipment and items. Finally, the badge system has been tweaked so that they are awarded as bonuses for good, great, or excellent hits during battles.This then results in Health or Skill recovery or increased coins and attack bonuses.

It's a lot simpler to play than to explain, and the main thing to understand here is that this is a perfectly pitched miniature version of a Role Play Adventure exclusively for the DS console. Wit and good design shine through the complex story and involved explanations.

The strong battles and platforming of the main game are happily complemented by various minigames. This is where we see a lot of new ideas for the series which previously side-stepped such distractions. Mario and Luigi: Bowser's Inside Story features a set of micro challenges involving Mario and Luigi working to achieve some power up for Bowser. It's a nice distraction when the main game is getting too much.

I never mean to get into these Mario and Luigi adventures as much as I do. A casual filler for my morning commute is usually my initial plan. However, like the previous titles, I was soon pouring hours of game play into Mario and Luigi: Bowser's Inside Story. The combination of the familiar characters, novel ideas and more action oriented platforming hits a real sweet spot. For me, it's the DS equivalent of the Paper Mario series on the Nintendo Wii - a strong idea intelligently updated and scaled for new technology.

You can support Jan by buying Mario and Luigi: Bowser's Inside Story

You can support Jan by buying Mario and Luigi: Bowser's Inside Story