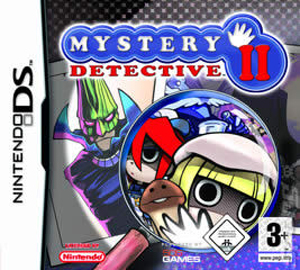 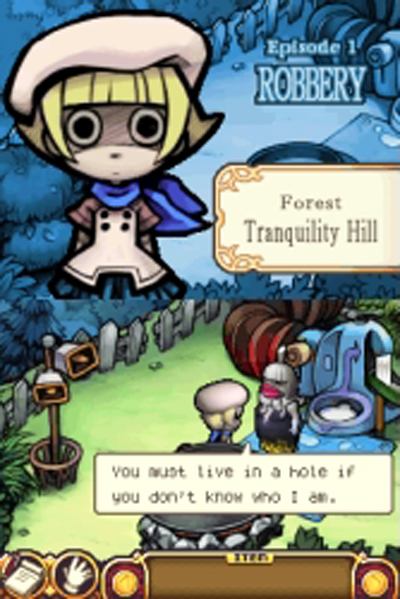 Mystery Detective 2 on Nintendo DS is the sequel to the original charming adventure/mystery game that combines a cute art-style with some fantastic puzzles and a wild and wacky storyline. Playing as the child detective Mackenzie once again, you'll use the stylus to investigate mysteries, talk to the bizarre townsfolk and stop your nemesis Cornstalker from stealing precious and rare artefacts. With its hilariously off-beat story Mystery Detective 2 is a wonderful example of individual style and satisfying gameplay that can only be found on the Nintendo DS.

With nearly every character returning from the first game, Mystery Detective 2 really replicates the same formula that was such a success in the first game. Playing as Mackenzie, the child detective, you'll be touching objects and recording it in your journal while you investigate the five cases that make up the game. Chloe and Penelope return, along with the slightly odd manservant Cromwell, and together they help (and sometimes) hinder your progress through the cases.

These characters were essential to the first game and gave it an individual look and feel that could be considered completely bonkers. Mystery Detective 2 continues in this vein and adds a nemesis going by the name of Cornstalker into the mix as well. This character isn’t just there to add to the weirdness as Mystery Detective 2 improves on the original by giving some continuity in-between the five mysteries. It's certainly an improvement in making the game feel a lot more cohesive but takes nothing away from the sheer bizarreness of some of the cases you'll work on. For example, the very first mystery you have to solve is why all the pink and green noodles have disappeared in town.

This brand of innocent oddness is the most endearing part of Mystery Detective 2 along with the kooky story. It never takes itself too seriously and considering the main villain is a stalk of corn it’s hard not to just go 'awwww!' and fall in love with how the game presents itself.

Solving these mysteries is a matter of wandering around the town's locations, discovering clues or questioning the residents as possible witnesses or suspects. The stylus is the primary form of interaction as you'll touch the screen to investigate specific objects, manage your inventory and move around. The point and click nature of this game works quite well and it’s easy to navigate around the town and carry out your investigation.

But all this charm and character comes at a price and it’s a problem that the first game suffered from as well - the solutions to these puzzles are sometimes so far outside the box that they're not even in the same country anymore. Even a veteran of the original Monkey Island series will struggle will some of the illogical and plain bizarre solutions you'll be expected to give. Despite Mystery Detective 2's strange world, many of these puzzles feel completely at odds with its own internal logic and more often than not, you'll be tapping on everything and talking to every character multiple times to figure out what you're supposed to do.

If the puzzles are ultimately too difficult or abstract to be enjoyable then the game is saved by its tremendous art-style. I have a love of anime and the slightly creepy style that Tim Burton uses in most of his movies and Mystery Detective 2 seems to be inspired by a combination of both those sources. The characters are so well drawn and animated that they convey both cuteness and creepiness at the same time - it lends an individual air to the game and the rest of the townsfolk are portrayed in such an odd way that it resembles a disturbing dream at times.

These characters and the dialogue that the game relies on is so off-the-wall that it gives Mystery Detective 2 for DS its singular greatest charm. The mechanics of solving the game's puzzles are frustrating at times, but the manner with which the world is presented and the bizarre mysteries make the game ultimately enjoyable. If you loved the first game then this will be right up your street, its charm and cuteness are just as prevalent as ever, but beware of those fiendishly difficult puzzles.

You can support Jan by buying Mystery Detective 2