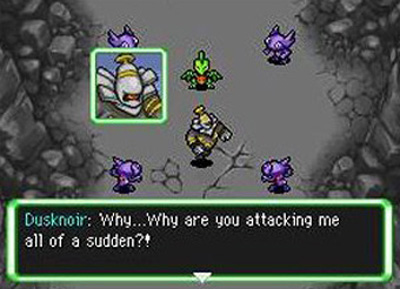 The latest sequel of the dungeon crawling spin-off adventure sees Pokémon Mystery Dungeon: Explorers of Sky for the Nintendo DS as an expanded version of last year’s Explorers of Time and Explorers of Darkness, with new characters and bonus episodes for all fans of Pokémon to snap up and enjoy. It’s the definitive version of the Explorers series and a Pokémon game not to be missed.

The premise to Explorers of Sky is based on the same gameplay as the previous Explorers games and is deceptively simple - you play as a Pokémon and build up a team of fellow Pokémon to help you crawl through the many dungeons of the game. But this premise and mechanic serves only to mask the extremely addictive and satisfying nature of all the Pokémon games both new and old. Marrying that gameplay to the compelling nature of a dungeon crawler means that all the Explorer games are next to impossible to put down.

The beginning of the game is where it's at its most charming as you have to take a personality test to determine what type of Pokémon you'll start off with. This is just the type of detail that makes the Pokémon games so appealing and Explorers of Sky manages to convey this with just as much furry cuteness as the other games in the series have done.

Explorers of Sky is, in fact, a remake of the previous games, much in the same way Pokémon Platinum was of Diamond and Pearl last year. Explorers of Sky also manages to match that success by adding new characters, new items and new moves that makes it an essential purchase for anyone who's serious about their Pokémon. It also means that this is the definitive version for any newcomers to the series and making your way through the game's main story now has some additional benefits. Advancing through the plot now unlocks bonus episodes and it’s this extra content that really makes Explorers of Sky an attractive proposition.

These bonus sequences can be played from the title screen after they've been unlocked and they're short, contained adventures that feature characters your hero of the main game meets along the way. Not only do they offer a little bit more of challenge than the main game, but they also help to flesh out the details of the story and extend the role of the supporting cast. This extension of the main story is a welcome addition to anyone who was a fan of the original Explorer games and the way these extra episodes offer some bonus challenges means Explorers of Sky is more than merely a Pokémon add-on.

But for any fans and serious players of Pokémon, Explorers of Sky is absolutely vital when it comes to competitive battling and keeping up to date with everyone else. It feeds directly into the need to 'catch 'em all' and as someone who has only dabbled in the arts of Pokémon before, I found myself sliding towards that all-consuming passion with a measure of terror and delight. Explorers of Sky opened a door for me into the Pokémon world and I feel it’s more accessible than the equally addictive Pokémon Platinum. While its critics may suggest this is nothing more than a perfunctory add-on, I found it an excellent starting point to the Mystery Dungeon series and impossible to put down after I had started.

Pokémon Mystery Dungeon: Explorers of Sky is the definitive version of the Explorers series and gives previous players of the series new characters and new bonus chapters to unlock. It's a purchase that, with the fact it also contains Pokémon Platinum's alternate Giratina and Shaymin forms, shows that Explorers of Sky doesn't need to be a brand new adventure to still be an excellent experience. There's enough content to keep newcomers and veterans of the Pokémon franchise busy for some time, for some this is a must buy.

You can support Jan by buying Pokemon Mystery Dungeon: Explorers of Sky