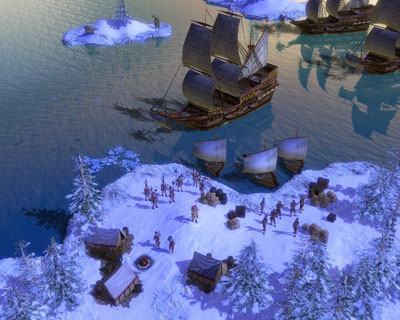 The Age of Empires III Complete Collection for the PC is the next chapter in the franchise that defined the real time strategy industry. Delivering three games in one, this pack gives players the ability to command mighty European powers, conquer the new world and make their way eastward, taking on the emerging Asian countries; deciding the outcome of the rampant power struggles that they find there.

Age of Empires III continued the long reign of this video game series at the top of the strategy genre, bringing a huge graphical and feature update to the previous iteration. The expansions followed suit, adding new races and options to the game and building upon the original with new races and campaigns. Now though, with the complete collection pack, these three titles are bundled in a package that is sure to entice any Age of Empires fan, old or new.

The original expansion of the game was War Chiefs, which allowed for some rather unique game play, and it’s included right here in the Complete Collection. Not only are several North American native tribes applicable as playable races, but each one comes with its own Chief; replacing the European Explorer of the original title. These units can be used to summon up powerful traits in their warriors and builders, creating unique healing units and dangerously effective soldiers to combat the threat from more technologically advanced opponents.

Adding onto the previous titles’ list of playable races, the Complete Collection comes with three unique Asian civilisations thanks to the Asian Dynasties expansion: the powerful, militaristic Japanese, the culturally rich Chinese, and the numerous and resourceful Indians. Each of these groups has their own unique characteristics, with individual army styles, wonders and buildings all of which reflect the historical cultures of each society.

Game play elements have been bundled from all three games, introducing new ways of winning and trading, along with random may styles that feature remixes of classic Age of Empires maps that are sure to be favourites with older players. This attention to detail is something that this franchise is known for, building upon a successful game plan, without removing the original details that made the game play great.

Those who prefer to engage in single player campaigns will be pleased to hear that this pack contains not only all of the original ones seen in Age of Empires III, and the first expansion War Chief’s, but those found in the Asian Dynasties one too. Now players can choose to engage in strategic combat with China, India and Japan in campaigns crossing several scenarios, with enthralling storylines.

Bringing all of this together is the Games for Windows service, which not only offers up easier installation, but added reliability and support for built in features of Windows Vista and 7, like Games Explorer and Parental controls.

For me, having the entire Age of Empires III saga in one concise package allowed me to enjoy the game to its full, as I was able to play straight through the campaigns, and dive into multiplayer whenever I felt like it; with the widest possible choice of armies and strategies.

When it comes to real time strategy on the PC, one franchise stands above them all, due to being consistently innovative, and up to date. Age of Empires III is a great game, and along with its expansions, it really ascends to higher levels of strategic game play. Thanks to the Complete Collection for the Windows platform, there is no better time to conquer your own digital world; purchase a copy today.

You can support Jan by buying Age of Empires Complete Collection