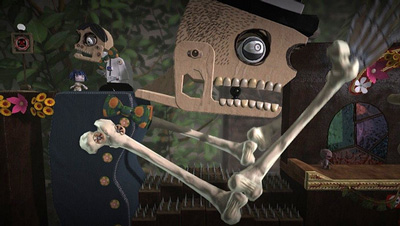 The phenomenally successful and critically-acclaimed LittleBigPlanet makes its move from the PS3 to the PSP in this amazing new version that brings the 'Play, create, share' motto to Sony's handheld device. Despite moving from the powerhouse of the PS3, this version is still just as beautiful, inventive and fun as the original. With improved controls and thirty new levels to explore spread over seven different areas, LittleBigPlanet for the PlayStation Portable is an impressive and essential title for anyone with Sony's handheld.

The technical achievement of the original LittleBigPlanet for the PS3 was an amazing feat to pull off. The scope for using your creativity made the game a review hit and although it had a few control issues it remains a system darling to this day. Now this PSP version looks to replicate that success and in every way - from the visuals, level editor and controls - it succeeds and in some cases, exceeds the original game.

This is no way a simple port from the Sony PS3, as LittleBigPlanet PSP has thirty new levels to get your teeth into that are spread over seven unique locations. What makes this most impressive from the start is how beautiful these look. There really hasn't been much lost in the transfer over from high-definition PS3 to the PSP - the detail and vibrant colours are still there and Sackboy, even in his diminutive form, is still as endearing as ever. There are lots of new collectables as well, with many of the items and stickers from the original game returning alongside some exclusive PSP content.

In terms of the platforming, the game has undergone a few minor changes that interestingly make for a much better experience than the one on the PlayStation 3. The controls have been tweaked so they don't feel quite so floaty as before, leading to a much more satisfying and less frustrating experience as you work your way through the levels. There are lots of rewards within the levels that make the progression a bit more rewarding, as well as a general improvement with the checkpoint placing. But the best part, above all else, is that there’s no limit to the amount of times you can respawn at a checkpoint. In the original game you would have to start the level again from scratch but this tweak makes the world of difference to the game, especially when the levels start to get a bit harder.

The platforming sections are just a part of LittleBigPlanet’s charm and the bigger draw for many is the opportunity to create your own levels and share them with the world. This might be the biggest challenge for a PSP game to get right, but LittleBigPlanet PSP not only includes the full editor from the first game but it also offers a few tweaks to ease the process as well.

That being said it still takes a large amount of commitment to produce a fully-featured level, just like it did on the PS3, but if you're interested in creating something in LittleBigPlanet then it's likely you’d be in it for the long-haul anyway. The improvements are centred on the shortcut system and the ability to undo any errors that you make. These aren't groundbreaking tweaks to make it easy for the layman to pick up and create Mario levels, but as someone who was committed to making levels in the first game these changes make the whole process a bit quicker and easier.

I loved the way you could share levels. As the PSP has wireless capabilities you can share content on an ad-hoc basis between friends or nearby users - or alternatively go online via the PSN. This online system is very similar to that of the first game and it's very easy to navigate on the PSP, with the heart ranking system making it easy to see what's hot and what's a bit rubbish.

LittleBigPlanet for the PSP is a masterful achievement and brings an incredibly unique and impressive game to the PSP. It has similar features to that of the PS3 version, minus the multiplayer, but improves the controls and the level editor to make it easier to use and less frustrating to play. This is the best version of LittleBigPlanet and without doubt takes the crown as the best PSP game to date.

You can support Jan by buying LittleBigPlanet PSP