< Alvin and the Chipmunks: The Squeakuel Wii Guide | Frugal Gamer

Alvin and the Chipmunks: The Squeakuel Wii Guide

Alvin and the Chipmunks: The Squeakuel Nintendo Wii 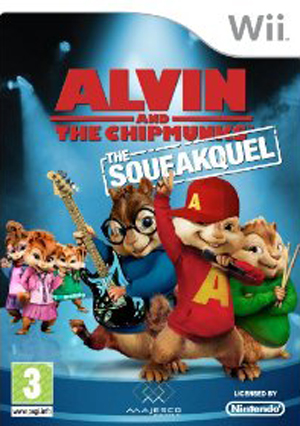 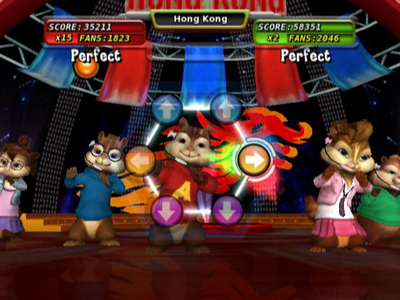 In Alvin and the Chipmunks: The Squeakuel for the Nintendo Wii, you can join the tiny trio as they embark on a world tour with their famous counterparts, The Chipettes. Performing in various cities from around the world you join in the fun by swinging the Wii remote and nunchuk in time to the music and watch as the Chipmunks perform their dance moves on stage. With a friendly difficulty curve allowing even the youngest of players to join in with the fun, Alvin and the Chipmunks: The Squeakuel is perfect for parties, ensuring a great time for young children and their parents.

Released to coincide with the film of the same name, Alvin and the Chipmunks: The Squeakuel takes the rhythm music game path in order to replicate the same look and feel of the musical film. On the whole the game successfully translates this theme and it makes perfect sense to use the Wii remote and nunchuk to dance along to the songs. Kids will love the great atmosphere the game has from the moment it starts and having all the helium-like voices present certainly adds to the experience.

Three mini-games are at the centre of playing along to each song and how well you perform in these determine how the performance of the Chipmunks goes. The difficulty level is set really low, so it’s unlikely that even the youngest or least-skilled player will have any trouble in getting through the songs and progressing through the game. It could have done with a little more variety with these mini-games or even a bit more of a challenge for the older players, but most children will find the game acting more like an Alvin and the Chipmunks DVD than something they want to interact with.

The songs are strung together by story scenes similar to the film. Sadly they aren't animated, but although the still pictures feel a little cheap it actually doesn't detract from the overall experience and it helps to give the songs your playing a sense of purpose and direction. One excellent feature is how the game starts to get a little bit more complex towards the end. It never becomes taxing to anyone who knows how to play videogames but the difficulty curve is wonderfully subtle and will give younger players a sense of progression by the time they've completed the game.

Although it would be easy to tear Alvin and the Chipmunks: The Squeakuel down on some of its faults, my kids were much more forgiving and enjoyed their time with the game. The lack of variety, the irritating high voices and the easy nature of the game all appealed to them because they love Alvin and the Chipmunks (which is more than I can say). The music is clear and crisp and it helps that there's a lot of positive affirmation throughout the game. Alvin always encourages players no matter what the level of their success and hearing the praise of the Chipmunks when you complete a song was worth it for the look on my son's face when this happened for the first time.

Alvin and the Chipmunks: The Squeakquel for Nintendo Wii is an excellent companion piece to the film and fans of the little helium-voiced chipmunks. There's not a huge amount of variety here for older players but young fans are likely to enjoy waving the Wii remote and nunchuk to the music and reliving songs and moments form the movie. If you've young children who love the series then this is going to be a hit at parties or family nights in.

You can support Jan by buying Alvin and the Chipmunks: The Squeakuel