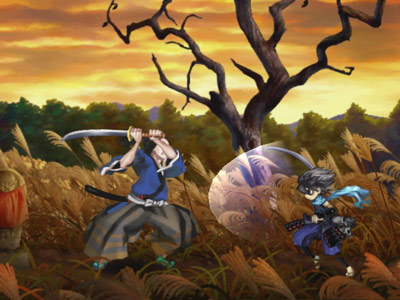 Muramasa: The Demon Blade on the Wii is an action role-playing game that follows the story of Kisuke, a fugitive who is being chased for a crime he longer remembers. Extracting beautiful hand-drawn visuals from the diminutive Nintendo Wii, Muramasa has a story and style directly inspired from Japanese Mythology and culture. With such elegant presentation and a deep combat system, Muramasa: The Demon Blade is a beautiful and challenging release that shows the Wii is capable of true greatness.

Taking its inspiration from the rich history of Japanese Mythology, Muramasa: The Demon Blade for Nintendo Wii is a beautiful game to simply marvel at. The hand drawn backgrounds and characters astound with their quality and quickly draw you in to this unique action role-playing game. It follows the story of two protagonists, Kisuke - a fugitive wanted for a crime he can no longer remember, and Momohime - a young princess who is possessed by the spirit of a foul swordsman and has to fight to regain her identity.

Although the two-pronged story is interesting, it's the combat and art-style that makes Muramasa Wii such a wonderful game to play. The backgrounds truly look like a watercolour painting brought to life, with some vivid detail painted into the environments to increase the atmosphere of the game. The graveyards are creepy and tense, the forests exude an otherworldly charm and the flashy style that accompanies the use of the swords all give you the impression that great care has been taken in its creation. Tiny details, like a fish jumping out of the water in a river scene, or the crashing of waves along a beach help to make this an unforgettable visual experience.

The combat is where the game really excels and it has a variety of options to choose from depending on what style you're after. Instead of one system shoe-horned onto the Wii remote, Classic controller or Gamecube controller, the setup will change depending on which controller you choose to use, with the Gamecube pad offering the most precise combat style.

There's lots of button and analogue stick combinations for the attacks and whilst you can mash buttons to get through combat, learning the routines really help to bring more enjoyment into this part of the game. Adding to this excellent level of complexity is the sword system. This allows you to only carry three swords into battle at one time, meaning that you have to weigh up the pros and cons of each sword's abilities or powers before equipping them. This leads to a lot more strategy when it comes to the combat than you initially might think, but it gives the game a satisfying amount of depth that improves the overall experience.

Although major new swords can be acquired after defeating bosses, most of the weapons you'll obtain will be done through the Forging process. It's here than the real depth of the crafting system makes itself known with some epic weapons not being unlockable until you've beaten the game with both characters. It's a good incentive for repeat playthroughs and means that at the end of all that hard work you'll have an awesome sword to play the game with.

I found the combat satisfying but for my review I have to say it was the artwork that I was most impressed by. There were times when I seriously just stopped the game to look at the gorgeous visuals and breathe in the atmosphere Muramasa: The Demon Blade had created. Nowhere did this style become more apparent than with the bosses. Here, the sense of scale was used to its fullest degree with most end-level enemies taking up the entire screen as you fight them. The most impressive is one of the final battles where you scale the heights of the heavens to do battle with the gods themselves - a truly awe-inspiring moment.

With such tremendous production values it's sometimes hard to believe that Muramasa: The Demon Blade is on the Wii, yet the control system for the game suits it perfectly. The fascinating story and atmosphere inspired from Mythological Japan gives the game a distinct look that makes it a compelling purchase. There's no other game like it on the system and for that alone it deserves the highest praise, but Muramasa: The Demon Blade is best game on the Nintendo Wii I've played.

You can support Jan by buying Muramasa: The Demon Blade