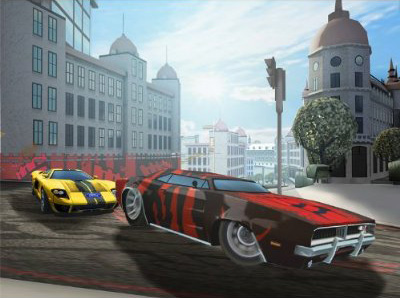 Designed specifically for the Wii, Need for Speed Nitro is the pure arcade racing experience that owners of Nintendo’s console have been hoping for. With the ability to customise your car and over thirty classic and licensed automobiles to race, Nitro delivers the fun and exhilaration that only an arcade high-speed racer is capable of. Combined with some challenging gameplay and advanced techniques to master, this is an exciting experience that pushes the racing experience on the Wii to the max - and the perfect partner to Need for Speed Shift on the 360 and PS3.

The re-envisioning of the Need for Speed franchise continues with this specially designed arcade racing game that takes full advantage of the unique nature of the Wii console. From the stylised modelling of the cars to the full range of control systems on offer, Need for Speed Nitro is an excellent example of a game that plays to the strengths of the console and excels in doing so.

The moment the bright colours hit the screen you know you're in for an entertaining ride and everything about the presentation lets you know how much of an arcade experience this game is going to give. The cars give loud throaty roars as you rev up your engine and then hearing the screech of tyres as you tear up the track with insane speeds is one of Nitro's greatest thrills. It's this over-the-top aesthetic that will make any old-school racing junkie smile in delight as Nitro shares more than a passing similarity to the older Burnout's and OutRun.

With such satisfying car handling it's no surprise that the controls in Need for Speed Nitro have been perfected no matter what your preference might be. There's support for the Classic Controller, Gamecube Controller, Wii Wheel, Wii Remote and Nunchuk - and all of these different schemes are easy to pick up and master.

The visuals are perhaps Nitro's most appropriate feature - instead of trying to get close to depicting realistic tracks, cars and scenery - the whole game goes for a highly stylish, primary colour-laden, oversized-car look that fits the game's aesthetic beautifully. This enables the game to run smoothly and the sense of speed you get when blistering along at 200mph is exhilarant and exciting. Hit the nitro button and things get even more hectic with the scenery passing by in a blur and the job of avoiding traffic, opponents and walls becoming increasingly more challenging and fun.

There are lots of modes on offer as well that take in a variety of different gameplay or car handling models. Drag mode narrows the course to four lanes of traffic and has you swerving to avoid traffic whilst concentrating on getting perfect shifts. All good fun, but if you need a bigger challenge then the Time Attack and Speed Trap modes are much more unforgiving than the rest of the game.

The career mode also offers a good deal of challenge, especially as you progress towards getting 100% completion. In terms of progression and presentation Nitro shares a great deal with its bigger brother Need for Speed Shift, awarding stars for a podium finish, lap times, and driving style. There's a large selection of races here and it’s a satisfying way to experience all the game has to offer.

Aside from the presentation, I got the most enjoyment out of Nitro with the way it implemented its customisation options into the game. Using the Wii Remote to easily change bumpers, spoilers, hoods, etc. was a nice touch to give my car its unique look. This individual style carried over into the actual racing, not just in the way my car looked when I was driving around, but how the course changed if I was in the lead. This meant the scenery would change dynamically to reflect my own style as I maintained 1st place, painting over boarding’s and buildings to visually represent my domination over the track and my opponents. It might strike you as a bit of a gimmick but it’s one of the slickest implemented parts of Nitro and gave me such a thrill when hooning along in the lead.

This change in approach to the Need for Speed Franchise has given the Wii its very own title and Nitro excels in providing the arcade racing experience that it sorely lacked. It gives Mario Kart Wii a good run for its money and thanks to the wide range of controller support, Need for Speed Nitro is the perfect progression for younger racers from the Mario racing game. The stylish graphics and sense of speed give a great arcade experience and for anyone who owns a Wii this has to be the racer of choice for the foreseeable future.

You can support Jan by buying Need for Speed Nitro