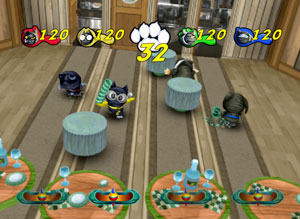 Ninja Captains for the Nintendo Wii and DS platforms, is an altogether zany take on the party genre of titles that see's a rag, tag group of feline ninjas, making their way around the globe competing in over 20 mini-games that'll test your dexterity, speed and timing; while learning a little in the process.

Based around four ninja cats that, ignoring the mouse epidemic building up in their hometown, end up accidentally traipsing around the world visiting important cities. While doing so they face off against one another in series of compelling, but easy to pick up and play mini-games.

This rather interesting twist on Nintendo's tried and tested Mario Party style is a perfect title for the younger gamers out there. With the party elements being at the core of the Wii it's an experience that can be shared with the entire family. High score features are available for those expert gamers that want to compete to see who can achieve the best rating on any particular game, but there are definitely more elements that will appeal to a younger audience, both in terms of gameplay and, oddly enough, education.

Similar to older titles like the educational geography game 'Where in the World is Carmen Sandiago', Ninja Captains incorporates globetrotting to various cultures and settings. While there aren't huge details given about each individual location, the settings change depending on locale. City names and continents can easily be picked up by younger players and those wishing to improve their knowledge. Some of the areas visited include: London, Sydney, Paris, Tokyo, Rio de Janeiro and many others.

Like other games of this type, Ninja Captains uses the Nintendo Wii's motion tracking abilities to the full, incorporating a variety of movements and controls throughout the game that make the most of the console's Wii-mote controller. Throughout the feline escapades found here you'll be climbing, balancing, dancing, canoeing and even surfing! All this with little more than a flick of the wrist or waggle of the arm. Ingenious.

However, should you have trouble with any of the games, a 'baby' option is available which does allow you to complete the mini-games with the difficulty really low. This is a great option to have as nothing is more frustrating than being stuck on a portion of a game that has become far less enjoyable, simply because you've been forced to repeat it over and over to advance.

There are some combat elements involved too, and as the story gradually progresses the lovable feline ninjas make their way back to New York where they realise the extent of the rodent problem that finally needs to be dealt with. In classic Nintendo fashion, it's an overblown boss, this time in the form of a giant robotic mouse.

Graphically the game is presented in a cartoon-like, hand drawn style though all the games themselves are in 3D. This gives a nice level of charm to the visuals and will most likely add to the appeal of a younger audience, even if an older one is used to a little more detail from modern titles.

While there are many party games out there, it was a truly refreshing experience to play with characters other than the Nintendo staple of Mario, Bowser and Princess Peach. Simply by changing the cast this game feels fresh and different, and let's face it, how often do you get to go surfing as a ninja cat?

The minigames in this title are well thought out and varied, and the lovable leading felines are comedic gold as they bumble through their adventures, in a not-so-ninja like fashion. There's a budding learning element which fits well in this Wii and DS game. Combine this with the general globetrotting shenanigans and this is a great little game for new gamers.

You can support Jan by buying Ninja Captains