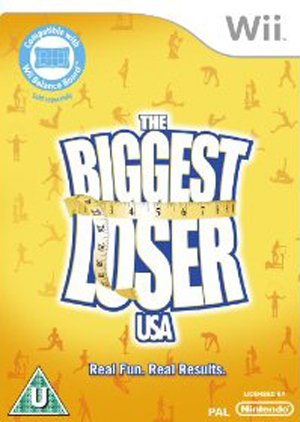 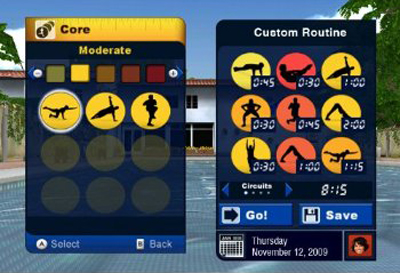 The Biggest Loser is an active-based videogame based on the hit health and fitness TV series of the same name. Featuring the same gruelling workouts and competitive challenges that makes the show such compelling viewing you'll be doing all you can to make sure you're The Biggest Loser. With both professional trainers Bob Harper and Jillian Michaels instructing and motivating you through the challenges, The Biggest Loser for the Nintendo Wii will inspire you towards a healthy lifestyle and help you lose those pounds.

The Biggest Loser for the Nintendo Wii is the second videogame spin-off from the hit TV show in the States, following on from the underwhelming Jillian Michael's Fitness Ultimatum earlier in the year. That game felt like a poorly executed TV tie-in with the famous face of Jillian Michael's covering up many of the game's shortcomings and flaws. Fortunately, this latest effort is much better and The Biggest Loser offers a much more conventional route to attaining your fitness goals.

Everything that you do in the game, no matter what the exercise, takes place in a virtual gym and this helps to keep you focussed on the task in hand. There are no glitzy lights or overly offensive 'reality TV' moments in the game and the entire package feels like a much more serious attempt at a proper fitness game. Unfortunately this equates to the interface of the game looking and feeling a little bland compared to other fitness titles. Perhaps the most glaring problem is the constant audio glitching that repeats the same dialogue far too often or doesn't tell you how to perform a certain routine - annoying when you're in the middle of a yoga pose and unsure what's next.

The workouts themselves consist of floor exercises that will be familiar to any of those who have taken a fitness class or watched a fitness video in the past. Focussing on calorie burn and aerobic workouts for the most part, these exercises only use the Wii-Remote and Wii-Fit balance board to provide feedback and to give a visual representation of what you're doing on the screen. It's a simple and pared-down approach that works really well and makes sure the progression from exercise to exercise is handled with the minimum of fuss.

The actual routines are well-structured and varied, even allowing you to participate in an optional warm-up and cool-down exercises for the complete experience. It's easy to choose the right level of intensity from a menu before you start and work out what works best for you. These physical routines form only part of the overall program as The Biggest Loser also includes advice for changing your lifestyle into a healthier and fitter one. There are recipes for healthy meals and a system for counting and calculating your calorie intake.

These lifestyle-orientated sections are presented in the form of short videos from Bob Harper and I found these to be the most motivational aspect of the whole game. They're upbeat and positive, giving the game a much more motivating feel than what I experienced when playing Wii-Fit. There are little snippets from former contestants as well, although none of them come close to reproducing the "let’s go get-em!" vibe that Bob can bring.

One of the oddest choices that this game makes is the decision to include eight of the contestants from the TV series in lieu of letting you create your own avatar. You have to choose one of these people to represent you throughout the game and watch them (hopefully) visibly lose weight. While it can be fun to effectively work alongside one of the show's stars, it feels too impersonal at times and considering this is a US show most people in the UK are going to have a hard time recognising any of these contestants.

Though its American-centric nature and the overall lack of polish might dissuade potential buyers, The Biggest Loser for Nintendo Wii is actually a well-rounded fitness game - especially if you're targeting weight-loss above all else. The videos are inspirational and if you're a fan of the show then this is an easy purchase, otherwise you'll have to get past the bland presentation to uncover one of the better fitness titles for the Wii.

You can support Jan by buying The Biggest Loser