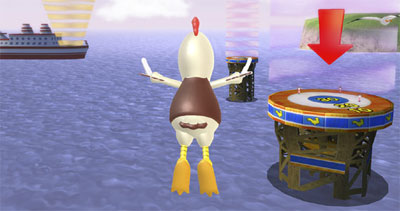 It's been two years since Nintendo released Wii-Fit and created an entire fitness,health and exercise genre that has dominated the charts. Since then a whole host of competitors have appeared focusing on Wii-Fit's weaknesses. Now Nintendo has responded with Wii-Fit Plus which fixes many of the problems in the original, while adding whole new kinds of exercise, ramping up the fun, and making it much more effective as a fitness tool.

As a regular Wii-Fit user I felt right at home in Wii-Fit Plus, Nintendo have not mucked around with the formula, just added a heap of new stuff, and tweaked what was already there. I'm going to quickly review the new mini-games, before looking at how Nintendo have overhauled Wii-Fit to make it a more effective workout.

The four original exercise categories, Balance, Cardio, Muscle, and Yoga, are joined by twelve new games in Training Plus, while Muscle and Yoga each get three new exercise. Yogis get the Spine Extension, Gate, and Grounded V, while muscle fans get the Balance Bridge, Single-Leg Extension and Side Lunge. Nothing thrilling, but they add to the variety, which is great if you've been using Wii-Fit for a while.

Training Plus section is where the interesting new games are. These are more than fitness games, they will test and train your brain as well, requiring all your coordination, timing and rhythm skills. This fusion of physical and mental agility makes for some pretty odd-ball but entertaining (and fiendishly difficult) games.

Three of the new games are enhanecd up versions of existing ones, Table Tilt, Balance Bubble, and Running. Table Tilt Plus and Balance Bubble Plus ramp up the difficulty of the originals with new kinds of obstacles to get past. You might want to practice on the originals before trying your hands at the Plus versions which I found very tough going. Basic Run Plus and newcomer Perfect 10 fuse a bit of exercise with some mental tests. Run Plus tests you on your observation skills, so keep your eyes open while you run round the island. Perfect 10 has you doing simple mental arithmetic as you try to bump (hula-hooping style) into giant mushrooms with numbers on. Kind of Brain Training but using your hips. It's a neat idea, and great for waking your brain up as well as your body first thing in the morning.

Island cycling was more my cup of tea: you "peddle" on the balance board while steering and breaking with the Wii Mote.

Joining Step and Rhythm Boxing, we now have Rhythm Kung-Fu and the Rhythm Parade. Kung-Fu is similar to Rhythm Boxing, but you will have to pay much more attention as there are no spoken instructions, you just try to copy your fellow students' moves. Rhythm Parade will have you marching along in time (or in my case totally out of time) to music while trying to move your arms like a majorette. Think Guitar Hero: Marching Band Edition. I found this really quite hard, but then my sense of rhythm is pretty poor - all the more reason to practice I guess. If you can do Step in your sleep then these will give you a new challenge. For those like me with terrible timing Obstacle Course is a bit simpler, just a case of walking and jumping around trying to avoid giant pencils rolling towards you. Still tricky the first time, but more straight-forward than the others.

Training Plus also adds four new Sports simulations, Skateboard Arena, Island Cycling, the Driving Range, and Snowball Fight (no, really). Skateboarding on the Balance board you realise how good Nintendo have got at innovative game controls, you literally push off as you would on a real skateboard, and then tilt to steer, which is great for working on your balance. The Driving Range has you practicing your swing while it analyses the way you move. For those that play, its analysis of your swing may be of some interest. Island cycling was more my cup of tea: you "peddle" on the balance board while steering and breaking with the Wii Mote. It's good fun speeding around the island, getting into other Miis' slipstreams (they have really thought about the physics in this one), and a surprising workout. The Snowball fight is a fun but slight game where you fire snowballs at Mii's with the Wii-Mote, while dodging them on the Balance board. It's easy and fun, and you won't end up with snow down your neck.

Tilt City and Big Top Juggling are the Wii-Fit equivalent of rubbing your tummy while patting your head, and will really test your coordination skills. Tilt City has you sorting balls that fall from the sky using three platforms, two controlled by your balance, and one by the Wii-Mote. It sounds simple, but is anything but. Juggling with the Wii-Mote and Nunchuck while balancing on a giant ball was equally tough. As a seasoned juggler I thought this would be a doddle, how wrong I was! I could barely manage two balls.

Finally, two whimsical little games that were clearly designed to make people think Nintendo have gone a bit funny in the head. Segway Circuit has you riding around on the eponymous "personal transporter" trying to pop giant balloons which are being stolen by moles (or possibly gophers). You tilt to move forward and back and steer with the Wii-Mote, all pretty simple, but good for the coordination skills. Bird's-Eye Bulls-Eye shows Nintendo's mastery of the balance board, and is the oddest of the lot. Your Mii, dressed in a chicken suit (I kid you not) has to fly between landing pads. You stay aloft by flapping your arms, which as if by magic makes your wings flap, and steer by leaning. The link between your actions and the Mii is spot on, an impressive feat for the board. A fun little game that will probably work your arms, a bit.

Looking at these new games you might think that Nintendo has gone entirely for the fun and neglected the 'Fit' bit of Wii-Fit, but you'd be wrong. Nintendo have listened to the criticisms and given us the My Wii-Fit Plus mode. This fixes the single biggest failing of the original, the lack of routines. The constant switching from game to game limited the effectiveness of a workout. My Wii-Fit Plus mode gives you three ways to build a workout. You can choose from areas of interest, such as lower back, or legs, and it will build you a workout based on the ones you select, using games and exercises from the whole selection lasting up to 80 minutes. Alternatively you can build a custom routine using Yoga and Muscle exercises which you can save for later. Unfortunately you can only save one routine, I've set mine up to do a 35 minute Yoga session, but you could mix and match.

As well as the time spent exercising, the FitPiggyBank also keeps track of the calories you've burnt, based on the exercise, and your weight.

However, you select your workout the result is the same, you'll be taken from one exercise to the other automatically, without having to constantly recalibrate the board, or select from anything. In your personal routines, you won't get individual scores or feedback for each yoga position of muscle exercise, instead you get an overall assessment at the end, which really speeds things up.

Wii-Fit Plus also improves on the original's tracking and recording. Now, as well as the time spent exercising, the FitPiggyBank also keeps track of the calories you've burnt, based on the exercise, and your weight. I tested it out with a pulse meter, and the calorie counts were within 5% after half an hour, which is close enough as makes no difference. It can even tell you what those calories are equivalent to in food, so this morning my 35 minutes of yoga amounted to one croissant. That might seem a little depressing, but it's a nice feature which helps to strengthen Wii-Fit's message that exercise can only be a part of a healthy lifestyle. It's no good working out if you are not watching what you eat.

Along with your weight, you can now record your daily steps, if you have a pedometer, and your waist size, a nice addition to the arbitrary measure of BMI. The fitness test itself has been improved, with a new Simple Test on the main screen. This does just the basics, no snide remarks, no nagging questions, it just weighs you and checks you balance. This is great if you are in a rush, or just don't like being nagged by a talking balance board. It's also better for kids who will be more affected by the original Wii-Fit's hectoring tone. Two other features might help if you want to get the whole family involved. Multiplayer mode has finally been added which lets the whole family take turns at any of the games, and the pet weigh-in means you can even include your overfed cats and dogs.

If you have Wii-Fit and gave up in frustration at the old stop-start progress, then this is an excellent upgrade that will bring new life to your Balance Board.

While much has been added to Wii-Fit, Nintendo have kept the same ethos of making exercise fun. Wii-Fit Plus is not trying to be a serious exercise regime for burning lots of calories (despite what its critics seem to think), it isl focused on a more "Eastern" idea of all over body fitness and well-being. The new games concentrate on the kind of mind/body coordination skills that most of us had in abundance when we were kids, but lose as we get older. If you are after a serious cardio workout to burn lots of calories, then alternatives such as EA Sports Active are better suited. If you are more interested in making fitness fun, and building strength, flexibility, balance and coordination, the Wii-Fit Plus is the clear winner at the moment. If you have Wii-Fit and gave up in frustration at the old stop-start progress, then this is an excellent upgrade that will bring new life to your Balance Board. There are a few niggles, such as the limit of one saved routine per person, but these are minor compared to the huge improvements Nintendo have made.

You can support Luke by buying Wii-Fit Plus