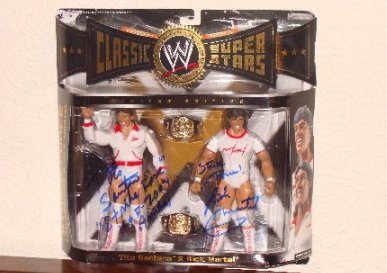 The art of collecting is a personal experience. It's one that can send you hunting through the deepest depths of the Internet's vaults, seeking that one special product. As a huge figure collector, often my 'special product' may not mean anything to anybody else.

Of course, every serious collector looks out for three key factors in the figures they buy: condition, rarity, and most importantly, how cool it will look next to the rest of their much-loved gang. If it hasn't bitten you yet, then watch out, because once the collecting bug sinks it's teeth in, it's mightily hard to shake off.

And I say that from first hand experience. I casually started buying gaming-related figures, with the odd Master Chief and Marcus Fenix making their way from the store into an unoccupied space in my house. Before long, I was standing outside a book signing for three hours waiting for WWE Hall of Fame inductee Bret 'Hitman' Hart to sign his autobiography - how did this happen? Meeting such a true great only fuelled the fire more, and I began scouring shop fronts, countless Internet stores and even the odd bargain bin to locate the next piece in my personal puzzle.

Typically, collecting figures and toys is frowned upon as childish by the majority, but in my experience, there's an interesting trend. Once the doorbell has been rung, and the postman has delivered yet another box of signed WWE Classic figures, the attitude of disdain evaporates, and onlookers bite the bullet by announcing 'Wow, they actually look really cool.' In this moment not only are you proud to have a shiny new box of treats to display, it's nice to see someone else appreciate the purchase too.

There are thousands of different types of figures to collect.

Of course, there are thousands of different types of figures to collect, and naturally, you'll narrow yourself down to the areas that interest you most. My love of gaming and wrestling has clearly taken over here, and has built the base of my expensive catalogue already. With a true love for the film industry too, the urge to expand already follows every purchase I make; shall I buy that Stone Cold Steve Austin, or invest in a Freddy Kruger collectible? It's these kind of decisions that make every collection unique, and often the centre point of conversation when a visitor witnesses the space-sapping virus for the very first time.

It's safe to say, as you're collection grows so does your knowledge. With many variations and alternate series of WWE figures to wade through, it's easy to get ripped off if you can't spot a bum deal. Where I would hastily jump at the chance to buy any figure with a squiggle of blue pen across the front in the early days, I now search for an autograph that 'means' something to me, and is also difficult for other collector's to get their hands on. If thousands of similar figures have been signed by one superstar, there's little value in the purchase. If, however, you hunt down a series one, mint condition, signed, and gorgeously delicious product, then the excitement is hard to contain.

Although I dubbed collecting a 'personal' experience, there's a hell of a lot of team work involved. Hunting the right figure requires the right contact, and having friends who can give you a leg up over the competition when sniffing out cheap deals is extremely important to making sure you stay ahead of the game. Already, my little under two years of collecting has led me to meet some fantastic people who stay in touch on a daily basis. When it all comes together, there's an air of satisfaction that is hard to beat. We all have different reasons to collect, whether it be for the love of snooping out an exclusive product, the sheer interest in figures, or even with the cheeky mind of making a profit in the future, but that doesn't deny the fact that building a library of figures is hugely fun and rewarding.

As I sit here, eyeing my new personally signed Jeff Hardy photo and pondering over where I'm going to fit the figures that currently lie dormant around the house, I know the game has me by the scruff of the neck. Needless to say, I'm not going to fight back. With every new purchase, my personal taste and influence shines through in a hobby that requires as much effort and dedication as your time and financial status permits- a factor that should appeal to everyone.


You can support Steph by buying I Collect Gaming Figures