Majin and the Forsaken Kingdom 360 Review

Majin and the Forsaken Kingdom 360 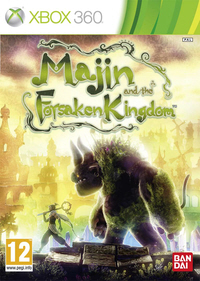 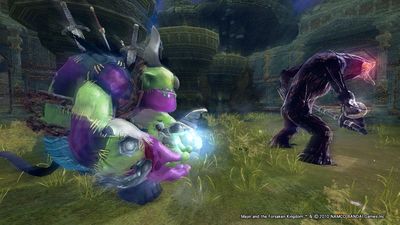 Majin and the Forsaken Kingdom Xbox 360 provides a world to explore and a companion to explore it with. Not the most polished game, but I couldn't help but keep playing to find that next costume for my lead character.

Despite the fact that you don't directly control the Majin, it's not a mistake that The Forsaken Kingdom is named after its lovable ogre. Not only does he do all of the heavy lifting, but he also has the most character and all the best lines.

You play the part of a thief who stumbles upon the Majin by accident whilst searching an old castle for treasure. You quickly realise that your new companion is your best chance of escape and when the talking animals tell you the world's fate, it becomes a tale of defeating evil as well saving your own skin.

As I mentioned in my Majin Preview, this is Namco's second third person action adventure of late and both feature an interesting double act - but that basic premise is the only real similarity between this and Enslaved. Where that game didn't really make use of your partner, other than for creating its narrative, here you'll be directing your friend to do all sorts of things and this cooperation is Majin's trump card.

Whether Majin is heaving open huge doors, crushing foes or letting you use him as a portable ladder, his strength and his size, together with smart controls, make these interactions the reason to keep playing.

You can order him into battle and sit back to watch him prevail or fall, but despite his size you're always better off giving him a helping hand. I couldn't help but wade in and even though your combat abilities are rather limited, with a ten foot minder, it's still an enjoyable way to break up the exploration.

I like how each time he receives a pod, new foliage grows upon him, giving him an appearance somewhere between a giant koala and a walking meadow.

Cooperative combat gives you red orbs that power up the Majin, whereas working independently gives you blue orbs that improve Tepeu. Working on both colours is necessary if you're to survive the tougher challenges in later areas, but the choice is yours to make.

The extensive maps are full of treasures including clothing for Tepeu and power-ups pods for Majin. These change the appearance of both characters and I like how each time he receives a pod, new foliage grows upon him, giving him an appearance somewhere between a giant koala and a walking meadow.

As you might expect with the two characters, there are numerous puzzles that need the input of both and it's not just a case of setting up Majin for a test of his strength - he soon gets additional powers that add up to some interesting interplay. Without spoiling too much, I loved watching him wander about with a bellyful of water, acting as a walking reservoir. My only disappointment was that there weren't enough opportunity to solve puzzles or that the solution was too obvious.

This highlights the weakness of the controls when precise platforming is called for though. Whereas games like Enslaved hold our hands to prevent us falling, here tumbling off ledges is commonplace. I really did lose my cool when a lengthy series of actions had to be done all over again and again. Extended and uninterruptible animations saw me involuntarily initiate actions that would obviously see me fall and it seems at odds with the slickness of the controls for directing Majin.

It might sound daft to complain that talking mice sound ridiculous, but do we really need them to be voiced by adults pretending to be sugar-cane sweet children?

Also distracting is the awful voice acting of the woodland creatures. It might sound daft to complain that talking mice sound ridiculous, but do we really need them to be voiced by adults pretending to be sugar-cane sweet children? They are also graphically rough around the edges, looking as if they were built for the PS1 - an inexplicable and off-putting aspect to the game that annoy me since it seemed sloppy.

Whilst there may be some rough spots in the game, exploring the enormous world, which is seamlessly linked together is a lot of fun. Areas often tease you, showing you places that you can't currently reach and these surely hide collectibles and costumes. In a time honoured tradition, gaining new powers will open these up and the level design which encourages exploration meant it didn't feel too much like backtracking.

What could have done with a little more signposting though is the overall objective, which appear momentarily on the map, but are then gone. This meant I was left searching for the next area, especially if I'd taken a break between play sessions and could easily have been fixed.

It does give you a great sense of adventure and two fun characters.

Majin doesn't do everything right, but it does give you a great sense of adventure and two fun characters to play and interact with. Upgrades don't improve the combat, but new powers for Majin, which open up puzzle opportunities, are the game's real strength anyway. What could easily be overlooked this Christmas should be given a chance, especially if you like to see interesting mechanics and a chance to dress up your ogre.

You can support Jon by buying Majin and the Forsaken Kingdom