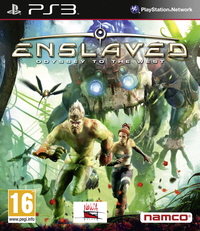 Further reading:
Journey to the West

Enslaved PS3 tells a beautiful story that succeeds despite technical issues. Its writing, acted with skill and ground breaking facial animations, kept me hooked to the end of the journey.

Enslaved takes the ancient Chinese story of Journey to the West and turns it into an action adventure in a post-apocalyptic world where robots have take over and humans are clinging on to existence.

We join things as a brawling guy named Monkey follows a young woman called Trip escaping a crashing slave ship. On waking Monkey finds himself wearing a headband that enforces his loyalty to Trip under pain of death. Trip demands Monkey escort her back to her family in the west and so begins a very entertaining road trip as you play Trip's protector.

Whether the cause is meteorite strike or nuclear war, the apocalypse removes the need for the game to render large numbers of people, cars and many of the things we take for granted. Instead it can focus on providing detail and creating alien environments grounded in what we know.

Instead of a sterile and barren landscape, Enslaved presents a vivid green backdrop. Years after the plagues and wars have ended civilisation, flora has reclaimed the planet as is abundantly clear crash landing into Grand Central Station, New York City.

Colour saturation is high throughout as lush undergrowth masks the desolation. Cityscapes resemble Aztec temples rising out of the Amazonian rain forest.

Something about the ways the eyes stare from the screen makes the characters appear more human and demanded my attention.

This art style gives Enslaved a unique feel - something that is important as elsewhere it is devoid of fresh ideas. It does however have some simply stunning facial animations that give the cut scenes and dialogue a level of engagement that I've not experience before in a video game. Something about the way the eyes look out at you from the screen make the characters more human and demanded attention.

Despite the technological advancement in virtual acting, this isn't a game about playing a role. Monkey's enslavement prevents freedom and even without this limitation the game is so rigidly structured as to guide your every step.

Levels consist of navigating platforms, fighting robots and solving the occasional puzzle and every one of these elements exposes limitations in game design. Amongst the beauty I was exposed to unhelpful camera angles, horrible difficulty spikes and terrible texture pop-in. Because of the quality of the story I was willing to forgive them - this isn't a game that engages mechanically, but one that won me over emotionally.

My love of this game crept up on me - initially I was just noticing the issues, but at some point the story became more important than glitch spotting. I even started to forgive the prescribed movement that only lets you jump between shimmering platforms and never lets you fall to your death, even though it robbed me of a feeling of exploring my world.

A combination of the virtual acting, the carefully unfolding narrative and sympathetic and amusing dialogue finally won me over. Quality did dip in the middle as art direction fell a little fall flat and the interplay stuttered a little. At this point the aptly named Pigsy makes his appearance and all of a sudden the humour and pacing picks up again. Happily, it then doesn't let up until the very enjoyable ending - that whilst wasn't shocking was still a very satisfying twist.

Like Monkey himself, I felt no need for any more freedom than the story offered.

Playing Monkey was a strange journey and not just because of the varied environments. The experience felt almost like watching events unfold rather than making them happen, which surprisingly wasn't as limiting as it sounds. Like watching a good film, I shared part of their adventure and eventually, like Monkey himself, I felt no need for any more freedom than the story offered.

Enslaved made me reconsider whether great games need to succeed both in mechanics and narrative. Bar the occasional moment of frustration, I was largely happy to be in the world they had created. Monkey wasn't a very complex avatar to play, but worked within the overall context. If Ninja Theory can learn from the mistakes, they have a genuinely opportunity to progress interactive storytelling.

You can support Jon by buying Enslaved