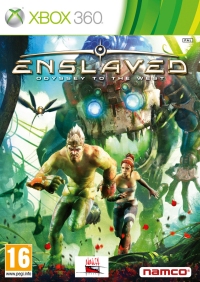 Enslaved is a beautiful action adventure, perfect for a night-in this Christmas. But what starts with promise fails to develop beyond an emotional pencil sketch. Enslaved lacks that something special to really bring some festive cheer.

Just as blockbuster adventure movies fit the festive season, Christmas is exactly the right time for a blockbuster adventure game. Uncharted 2 was last year's ticket with its endearing banter and high-octane set pieces. It was a cheesy game, we know this, more importantly though it was a lot of fun.

Enslaved is in the Uncharted 2 mould. The cinematic cut scenes, constant chatter, vivid visuals, simplistic platforming and repetitive combat are all in sync with Uncharted 2. Both games are more about what's going on around you rather than what you're doing, and it's this pseudo-passivity that invites comparison to movies as much as any cinematic presentation.

It made me realise that I often pass through games without taking the time to look around and appreciate my surroundings. When I stepped back from playing Enslaved and took in the environment, I notice all sorts of little touches.

Half-torn posters asking people if they've seen missing loved ones jar with the playful videogame combat and puzzles. The remains of a child's bedroom in amongst the destruction - a teddy bear left lying against a bed - is almost too sad to look at.

It stops me in my tracks and says something more subtle than any narration ever could. It's this pseudo-passive story telling that makes all the difference to Enslaved. And it makes me want to take a break from the game play to engage with it on a deeper level.

It all adds to the fact that, on the face of it at least, Enslaved is a winner. Adapting Journey to the West and spinning it sci-fi with a post-apocalyptic setting is exactly the kind of concept that sparks my curiosity. It's games like Enslaved that I've anticipated most since my return to gaming simply because they couldn't have been done until now, at least not with the graphical and artistic craft developer Ninja Theory shows off in it.

Trip gets weaker and weaker and becomes an emotional hindrance to the man she enslaved.

You can really bask in the lush wasteland of Enslaved. Those words may seem mismatched but that's because Ninja Theory, rather than echoing the melancholy grey of so many games, chose to bring colour and life to its wilderness. The New York of Enslaved is literally an urban jungle. Its broken skyscrapers are overgrown with the greenery of grass, vines, and trees. As I traverse the fragile floorboards and rusting scaffolding I can hear birds chirp and see the contented flutter of a little white butterfly.

Stunningly beautiful games like Enslaved make me wonder if I can ever return to the bitty graphics of my youth. I remember playing Final Fantasy VII and swooning at its videos. Thirteen years later, I fear the fidelity of modern games is turning me into a snob. At times I forget I'm playing a game and not watching a movie.

The trick, I think, is to not be won over by a game's beauty. For all the potential of its concept and grandeur of its graphics, Enslaved lacks a spark many of those old games had in spades.

The two main characters are a gruff muscular journeyman called Monkey (the player character) and a lithe redhead called Trip (she's the constant companion). Both look believable, particularly when they move and speak. Monkey runs head down with his arms held low, echoing the animal he shares a name with. Trip is more restrained in her movement, but she loses all composure when panicked, flailing her arms and tripping over herself. Both characters are voiced well, another attribute Enslaved shares with Uncharted 2.

But that's where it ends with the narrative. The characters don't develop, if anything they regress into gender stereotypes. Trip gets weaker and weaker and becomes an emotional hindrance to the man she enslaved with a mind-controlling headband. Monkey ends up fighting for a woman who has treated him terribly throughout against his will. The romance that then develops is never convincing.

There's nothing beyond the surface of great visuals and stunning cut scenes, no matter how much the game pleads otherwise.

Beyond the characters' interrelationship, Enslaved speeds through a disappointingly predictable save-the-world story with sparse explanation. It's all kept vague up until the end, when everything that happened up until then is set aside in a pretentiously momentous conclusion that utterly fails to make the futuristic world of Enslaved resonate.

If I don't take Enslaved too seriously then I can enjoy it. Although this is hard when the game seems overly taken with itself. Like Indiana Jones, Uncharted 2 knows its place as a blockbuster adventure delivering laughs, thrills and tears, and it plays to its strengths accordingly.

If Uncharted 2 invites comparison to Indy then Enslaved invites comparison to Avatar. Like that film, Enslaved desperately wants to be more than just something pretty, but sadly it's trying too hard. The story is weak, the combat is ordinary, and the platforming is textbook stuff. There's nothing beyond the surface of great visuals and stunning cut scenes, no matter how much the game pleads otherwise.

I'm being harsh on Enslaved. Uncharted 2 is a hard task master. But then again I'm always harsh with the games I want to love. I see the potential and it frustrates me when it's not realized. Even though Enslaved is a solid enough action adventure, what it lacks leaves me a bit cold on my warm Christmas night in.

You can support Sinan by buying Enslaved