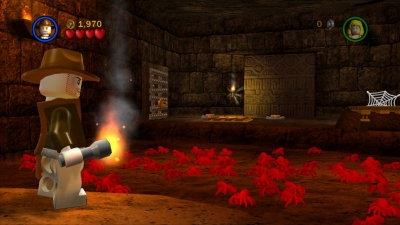 What do Lego bricks and Indiana Jones have in common? They're probably fondly remembered by most people as classics from their youth. I was definitely a big fan of both in my younger days. Well now they have been brought together in this fantastic video game which puts you in the shoes of Indiana Jones and his various side kicks as you battle your way through the memorable movie scenes.

You can choose to play Lego Indiana Jones: The Original Adventures in single player or multi player mode. We opted for the multi player version with my husband taking on the role of Indie - and me playing whatever side kick was featured in that particular scene.

You can play through each of the classic movies; Raiders of the Lost Ark, Indiana Jones and The Temple of Doom and Indiana Jones and the Last Crusade. The developers have done an amazing job of crafting the scenes from these movies entirely from Lego!

Great if you've had a stressful day and need to take your frustrations out on something!

We kicked things off with the Raiders of the Lost Ark level and quickly found our feet. To move through the levels you need to complete certain tasks or puzzles, mainly by digging up sets of buried Lego bricks and building bridges and towers amongst other things. You also need to collect points by picking up various coins and crystals, most of which are found by destroying pieces of the Lego set with your bare hands; great if you've had a stressful day and need to take your frustrations out on something!

While some of the puzzles are quite tricky we didn't find ourselves too stumped and moved through the levels at a fair pace. Each level has a mission at the end where you have to kill a Lego baddie of some sort. My favourite scenes so far have been running away from a Lego boulder and jumping aboard a giant Lego airplane; fans of the movie will know exactly what I'm talking about!

Lego Indiana Jones: The Original Adventures is also extremely funny at times; especially when Indie comes face to face with a Lego snake which has his knees trembling and causes him to cower in the corner. This dry humour is carried through to the out takes, where the characters grunt rather than talk and the scenes are played out in a manner that I'm not sure Spielberg quite intended.

If you're looking for a game with longevity then this should be a perfect pick.

If you're looking for a game with longevity then this should be a perfect pick. We're about 6 hours in and have yet to complete all the levels from the first movie. Once you've successfully completed the level in story mode you unlock free play; which means that you can go back and revisit the scenes you just played through. I think if you want to score big in this game then you'll need to revisit all of the levels as there is just too much to take in as you play through them the first time. I know for sure that I need to go back to some of the levels as I haven't found a character small enough to fit through some of the trap doors, which must be guarding all kinds of hidden treasures!

I'm thoroughly enjoying working my way through this game, and it's the first on the PS3 that my husband and I can play together. If you're a fan of Indiana Jones or Lego bricks then you're sure to enjoy it too!

You can support Clare by buying Lego Indiana Jones: The Original Adventures