No breed is more loyal than the Labrador. A while back in Animal Crossing, Nintendo sent out four exclusive Nintendogs puppies to celebrate the fourth anniversary of their Nintendogs game.

As long time fans of Nintendogs here in our household we were quite excited about this when we heard the news, so we turned on the Wii specially to see what the puppy would be like. We weren't disappointed; as I started up the game there was Pete waiting outside the house for me! He immediately presented me with a letter from Nintendo and the gift was enclosed: a Labrador puppy!

I quickly placed him upstairs in my bedroom where he looked at home, but I must confess to being a little disappointed that you can't interact with him. I was hoping that he would at least woof! Many other Animal Crossing special items have sounds or little actions that happen when you press 'A' while standing next to them, and I was hoping for some sound effect or action from the puppy - but no. Ah well. He looks really cute, anyway, and I am looking forward to seeing the other three puppies over the next few weeks. 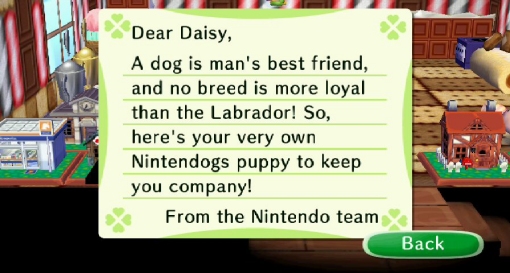 I know I've missed out on other downloadable content in the past few weeks, but I did receive a special pattern from Wendell. I didn't know which hat to wear with it though, so I'm sticking with my witch's outfit until Halloween at least! I also missed the Autumn Moon festival, which had a special item attached and only realised when I read the notice on my town's noticeboard - I wonder if Tortimer missed me?

I might consider some time travel to try and catch them if I can.

I haven't bothered to re-play the day, but if you miss a special event like this and you are bothered, you could always set your Wii clock back a few days to play that day in the game. I have given up on fishing and bug collecting. There were a few fish and bugs that I didn't manage to catch in August and September, and as a result I haven't achieved the golden rod and net that in theory I should have been able to get by now.

There are sections of my museum collection that are complete, but I'm missing one or two items in each area, unfortunately. Since I've been so busy recently I've adopted a very laid back attitude to the game and can't afford to worry about the missing ones until the school holidays come around - then I might consider some time travel to try and catch them if I can. 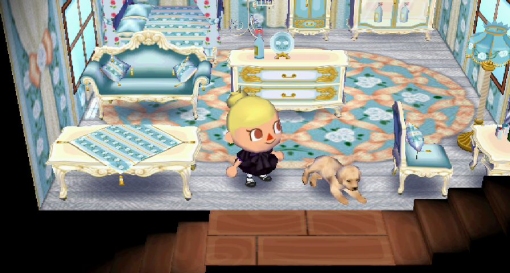 On the other hand I might not bother, they may just have to wait for next year! October has rolled around, and with it the grass has changed colour; it's now a yellow-green, and I know it will wear away quickly and take ages to grow back, so I am trying to stick to the paths when I walk around the town. I'm slowly re-planting with flowers but I haven't really bothered re-landscaping with trees since I cut them all down over the summer. I'm enjoying just pottering around town and chatting to all my townies, delivering the odd present or letter for them, and generally taking life easy. Still no golden axe from the wretched fountain goddess!

I think the next exciting event may be towards the end of the month, as I did receive a letter from Jack about Halloween. And I notice that candy has turned up in my store, so I am stocking up each day - not sure what I'll need it for but I'm sure it will be fun!

You can support Clare by buying Animal Crossing 18: Loyal Labrador