FGTVLive 1.9: Ratchet and Clank All 4 One PS3 Review

Fred loses his mind as the very fabric of his universe crumbles around him. In others words Bob stops being silly as they review Ratchet and Clank All 4 One.

Ratchet and Clank All 4 One PS3 Review 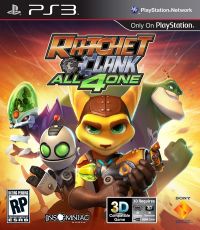 You can support Adam by buying FGTVLive 1.9: Ratchet and Clank All 4 One