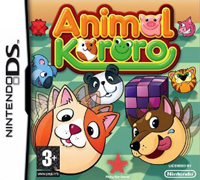 Other GamePeople columnists have reviewed this from their perspective - huh?:
Eclectic Gamer (DS)
Microcosm Gamer (DS) 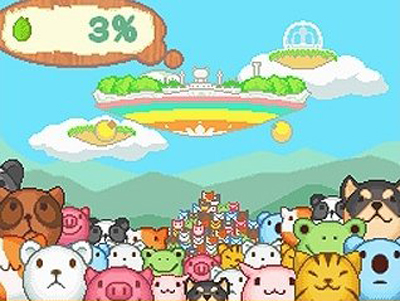 Animal Kororo DS hides brutal challenges behind a wonderfully cheery Japanese facade. Though we enjoyed playing the game and appreciated its cute style, the high difficultly level quickly made the experience feel a little frustrating and unfair - particularly for the littler family members.

The DS is blessed with a vast abundance of puzzle games so new game always has to work twice as hard to make an impact in the market. Animal Kororo immediately got my attention thanks to its strong anime art-style and cute characters. It worked for my kids too and my eldest son was eager to try out this fresh-looking puzzle game and see how it played.

The story and setting that frames the entire game is delightfully simple. Kororo are falling through a giant hole that's opened up in their kingdom and you choose whether you play as a Piggy or Bunny Kororo; guiding them all the way back home to the Kororo Kingdom. Your progress is monitored by a percentage score in the top left corner and when it reaches 100% then all the lost Kororo have been successfully recovered.

With a game that looks as cute as this you might be forgiven for thinking the difficulty would be quite low but Animal Kororo throws out some pretty mean challenges after only a short period of play.

None of this was particularly compelling but the bright anime art-style certainly did the trick for both my kids and I. It might put off older children with its Pokemon-like visuals and repetitive music but this is where Animal Kororo masks the real nature of its game - the challenge of the puzzles.

With a game that looks as cute as this you might be forgiven for thinking the difficulty would be quite low but Animal Kororo throws out some pretty mean challenges after only a short period of play. The basic game play centres on rolling Kororo back and forth on the screen and trying to match them up in identical pairs. The Kororo only stop when they hit another Kororo or the side of the screen and the other catch is that the sequence of moving these animal is fixed to the same pattern of left, up, right and down.

It adds a decent amount of strategy to the game which I preferred than having just a random order to work through. However, this premise isn't quite as simple as it sounds as there's a time limit to worry about and when you're rushing against the clock it’s easy to make mistakes. I liked the option of three difficulty levels but in all honesty only the easiest option made the game remotely playable. Normal was far too difficult for my kids and hard was downright impossible even for me with a clear head and after eight hours sleep.

Other problems I had was the random dropping of Kororo at the beginning of each stage. When the game starts to introduce thorns that offer an instant game over when touched, it becomes very difficult to figure out the solution if you're constantly starting from scratch every time. Though the fixed rolling mechanic adds an element of logic this random dropping at the start almost cancels that reassuring feature out and it becomes a trial of luck and reflexes. I could just about muster enough flicking and random luck to get through the stages but my kids were hopelessly stuck after a short while making this game impossible to complete and enjoy.

I could just about muster enough flicking and random luck to get through the stages but my kids were hopelessly stuck after a short while making this game impossible to complete and enjoy.

Fortunately the story mode is only one of three parts to the game and Attack mode is much easier in comparison. It removes the obstacles like balls and thorns, instead asking that you pair up a certain number of different Kororo within a certain time. The absence of the thorns was particularly welcome and it’s this section of the game that we enjoyed the most, playing it for a number of nights after the trauma of the story mode.

The other mode is multiplayer and this involves matching up Kororo against an opponent and reducing their allotted time in the process. It was good fun across local Wi-Fi and was probably the least stressful aspect of the game compared to the single-player sections.

Despite its relentless difficult curve we enjoyed most of our time with Animal Kororo in the Nintendo DS. The simple premise of matching Kororo and the cute art-style helped ease some of the unforgiving aspects the game shoved at us with Attack mode being the most balanced experience for us all. It isn't the best DS puzzle game out there but the individual style and quirky nature means it’s a far more memorable experience than we ever expected.

You can support Andy by buying Animal Kororo