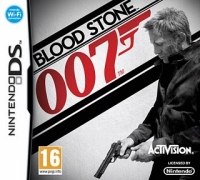 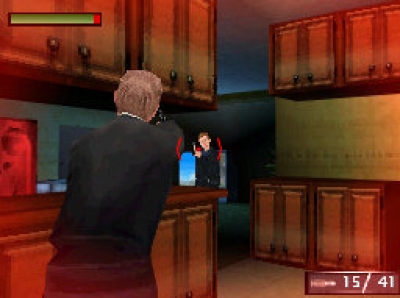 Blood Stone DS adds a plausible cover and melee system while romping through waves of enemies. Variety and sheer fun create a surprisingly robust alternative to other shooting games on the DS.

Blood Stone is an original James Bond story from the same author as GoldenEye. As well as being available on the bigger consoles, the DS version offers a mix of shooting and driving sections from the developers (N Space) who have also recently released GoldenEye 007 (DS) and Call of Duty Black Ops (DS).

Although the cinematic and driving parts of the game obviously struggle with the DS's limited graphics, the shooting sections are smooth and introduce some innovative gameplay.

Control for first person shooting games on the DS is pretty standardised these days. Blood Stone takes this basic formula - D-Pad to run and Stylus to aim - and adds some nice touches. You can double-tap the D-pad to sprint for example, as well as duck behind cover via the touch screen and pop out by pressing up on the D-pad again.

When you get close enough for hand-to-hand combat there is a nice simon-says moment, where you have to copy a series of directions, as indicated on screen, via the D-pad. Copy these prompts quickly enough and you'll get the upper hand. You can also interact with various items of scenery - kicking over tables for additional cover and hiding behind doors and other furniture.

The focus here is on action rather than precision shooting, or sticking to the rules the big consoles use in shooting games. Each stage unfolds nicely and creates a better sense of engagement with the player than Black Ops or even GoldenEye on the DS.

The focus here is on action rather than precision shooting.

The environments feel varied, and contain different elements you can interact with. Fire Extinguishers mounted conveniently behind a bunch of enemies can be shot to cause explosions - a modern day explosive barrel. In one section you can shoot some scaffolding which collapses down on the enemies beneath.

Things aren't gratuitously gory but there is a bit of blood here and there (ed: not just in the title). Enemies die convincingly, but then vanish. There is the general feel of a blockbuster movie, but still most families with young kids will find this a bit too violent.

The driving parts of the game, whether in a boat or car, aren't as much fun. The limited scope of the DS visuals is more obvious here. What results are rather constrained sections that simply require you to kill the same looking enemies over and over again until you get where you are going.

The surrounding menus, music and cut-scenes all serve their purpose and create a suitably James Bond feel. Although the character's mouths don't move when they are speaking, having these scenes rendered by the same engine as the game itself give the experience some much need continuity.

It's Blood Stones novel additions to the DS's shooting gameplay that make it stand out.

If you are looking for a shooting game on the DS, then you have quite a choice. Which is best for you on depends what you are looking for. The sheer retro simplicity of GoldenEye 007 is hard to beat, although it can get a little samey after a while. Black Ops has more variety and a better targeting model, but it lacks any real sense of character. Blood Stone nestles somewhere between the two, offering varied locations and gameplay, although with a weaker multiplayer mode only accommodating four, compared to their six, players.

Beyond the novelty of a new bond story to play through, it's Blood Stones novel additions to the DS's shooting gameplay that make it stand out though. If you can put up with the driving sections this offers more shooting engagement that you would expect from the diminutive DS.

You can support Andy by buying Blood Stone 007