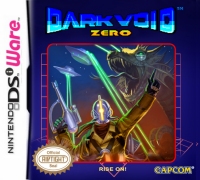 Other GamePeople columnists have reviewed this from their perspective - huh?:
Scared Gamer (iPhone) 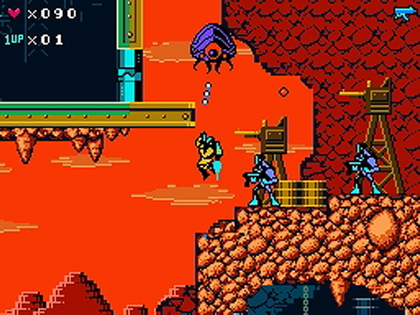 Dark Void Zero recreates history in tangible playable beauty. Amongst the clamour for new, more and better it's refreshing to revisit the past with such dignity. Great to see the children's mind boggle as they comprehend a long gone era of gaming as well.

The unusual back story to the game is an invented history that Dark Void Zero is the revival of a long lost project. In reality this is simply a new take on the game with classic NES visuals.

What might have been marketing spin actually turns out to be an impressive revisiting of what made NES games so strong. Dark Void Zero is not simply an ascent to by gone days, but embraces every element of 8-bit style. Taking in play mechanics from Metroid, Mega Man, and Bionic Commando, the game does more than simply tip its hat.

Platforming simplicity here reminds you how complex video games have become in the intervening periods. Each level you are tasked with collecting orbs and key cards. As you progress you are awarded more weaponry and equipment. Missiles, jet packs and the like then grant you access to previously unreachable areas of the levels.

Although it came as something as a shock to my kids - being raised on multiple save points - Dark Void Zero's grasping of the game save nettle adds to the authenticity here. You can't save at any point - this is back to the days of play it through in one sitting to complete it.

As a trip down memory lane this is a lot of fun, but Dark Void Zero is a great game to play as well.

When you do die you go back to the most recent checkpoint. And proficient players will find they can work through the game pretty quickly. But, again in true 8-bit style, this is as much about the high score as it is about completion. Discovering new ways to boost that all important bottom line is as much fun as completing levels.

As a trip down memory lane this is a lot of fun. But not only that, Dark Void Zero is a great game to play as well. I found it a great vehicle to get my kids interested in some of the other games I played in my younger years.

Dark Void Zero joins the swelling catalogue of games that not only honour 8-bit gaming but bring it back to life. THe recent Wii-ware Mega Man is the obvious reference point here but other games seem to be picking up on the trend as well - sub games in No More Heroes spring to mind.

You can support Andy by buying Dark Void Zero