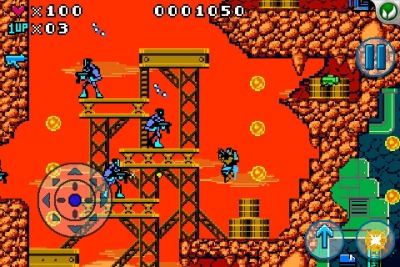 Dark Void Zero plays the nostalgia card in style. Coming to iPhone and iPod Touch from the DSi, it continues our trip to the alternate history of this supposedly cancelled NES game. Not scary, but hugely faithful to those unnerving 8-bit moments.

The 80's fashion and music revival casts its influence net wide and catches a juicy little Capcom carp by the name of Dark Void Zero. Set in the Dark Void universe, Dark Void Zero is a prequel to the original console release. Rather than simply making an origin story, Other Ocean have taken a more novel approach - crafting a product with its own history as a cancelled 8-bit Nintendo Entertainment System title. While it may only offer simple old-school platforming, it manages to outshine the full release thanks to its fantastic level design and authentic feel.

Thank you, Capcom. You had me worried there for a while. Between the recent Bionic Commando and Dark Void I thought you might be losing your touch. Then, from out of nowhere, you deliver Dark Void Zero and prove that you still know how to make me happy. Even with your recent dedication to producing high quality 8-bit styled games, it comes as a treat to see you breathing new life into the lacklustre Dark Void licence with this fantastic old-school title. It served not only to reassure me of your talents but also to give me one of the best traditional gaming experiences I have had on the iPhone.

What I find particularly pleasing is how faithful it is to the feel of both the 8-bit play style and the essence of the licence.

What I find particularly pleasing is how faithful it is to the feel of both the 8-bit play style and the essence of the licence. With Dark Void involving so many varied mechanics I will admit that I was skeptical that the 2D sprite based game would be able to capture the same feel. But you managed to boil that first title down to its core essence while mapping the controls on to just two buttons, making a game that feels faithful to the original's concept and at the same time like a game of the period it mimics.

It was this simplicity that allowed the fantastic level design to shine. Channeling elements of Metroid to allow me to progress along linear paths while providing the illusion of an open play space. From the main mission objectives to the extra tasks, everything tied together perfectly, funnelling me down the right paths yet providing a rewarding sense of exploration.

It almost makes me wish I had a DSi, because I would happily pay again to replay this game on hardware more suited to the task.

It is true that the controls leave a little to be desired, but I understand that this isn't your fault, Capcom. Porting this from the DSi to the iPhone was a welcome move and I do not hold you responsible for the limitations of the touch screen for such 8-bit digital game play. It almost makes me wish I had a DSi, because I would happily pay again to replay this game on hardware more suited to the task.

But above all, Capcom, I must applaud your work on the game's visual design. Displaying everything in wondrous pixilated glory, I was actually shocked by its authenticity. Every element was instantly identifiable with its 3D counterpart, but managed to be so faithful to the era it imitated that there is a real sense this could have been a cancelled project from your vaults.

Coming in at just GBP1.79 the three levels may not have offered me the best value for my time, but what it did offer was an incredible, new, old game. A title that nostalgic gamers like myself can enjoy and reminisce with, while at the same time experiencing something new. It may come as small consolation to your investors for the poor performance of Dark Void, but they can take some solace in knowing that you have made fantastic use of the licence with Dark Void Zero, and made at least one of your fans very happy.

You can support Alex by buying Dark Void Zero