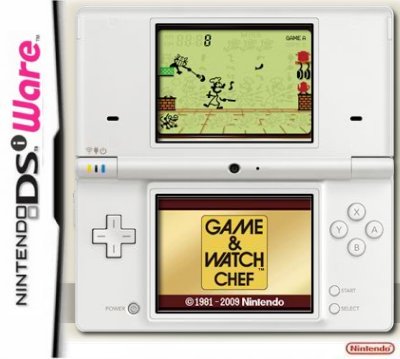 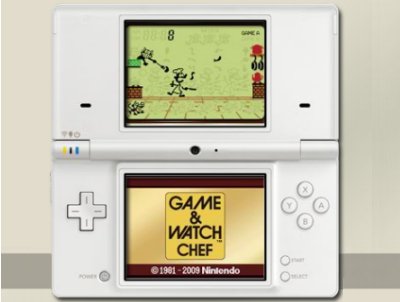 Game and Watch Chef is like trying to juggle with three random objects. You have to wrestle to keep each in the air as they fly at different speeds and trajectories.

Game and Watch games are an original Nintendo game product from the 1980s. Each Game and Watch title provided one simple game to be played on an LCD screen, as well as a clock and an alarm. I remember them as the games I used to play in the playground at school through my primary school summers.

Although such old games may seem out of date, their return as downloadable DSi-Ware games couldn't be timelier. Games are returning to this very simple pick up and play style that Nintendo popularised with these devices. Not only that but many famous plumbers (Mario) and adventurers (Zelda) began life in liquid crystal grey on these super simple addictive experiences.

Chef is a simple premise that often crops up in Game and Watch titles - keep things from falling on the floor. Like Ball and Helmet a series of objects rains down on the player as they rush from one to the other trying to keep them in the air.

In itself this is a little frantic at first. This isn't helped by the fact that each (cooking) item flies to a different height and speed. Add to this a mischievous cat who (un)helpfully prods items to send them back down quicker and you have to have your wits about you to do well.

In this way, Chef combines elements of reaction and observation games. Snap judgements are required to keep everything in the air as the player prioritises which is the most likely to hit he floor first.

Chef has all the classic Game and Watch elements, repetition, simplicity and nail biting toughness.

Like most Game and Watch titles, there are two play modes - Game A has you juggling three items and Game B for more advanced players tasks you with keeping fours things in the air. Although the game is simple, achieving a good score on the more difficult levels is surprisingly challenging - and addictive. This simplicity though, makes it playable by both newcomers to gaming as well as the very young players in your family.

There are some admissions to modern gaming. You can pause the action by pressing start or closing the DSi lid. You can also start the game from a score you have previously achieved - although this won't count for the high score table it's a nice way to practice.

Chef has all the classic Game and Watch elements, repetition, simplicity and nail biting toughness. It's a combination that not only worked well in the 80s, but also stands the test of time today. For 200 Points on the DSi-Ware store it should provide more than an afternoons diversion.

You can support Andy by buying Game and Watch Chef