Videogames and Pipe-Organs in Exeter Cathedral 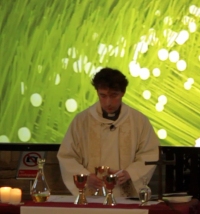 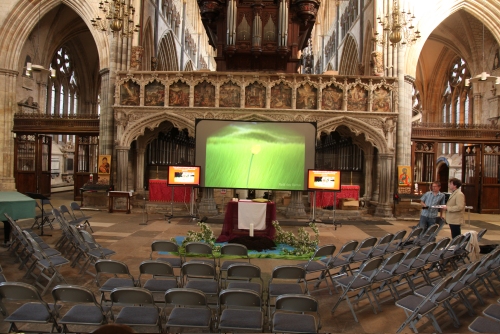 Dropping a PS3 into a Cathedral worship service is a recipe for disaster. What could be more inappropriate in the ancient liturgy of the church than expensive complex technology?

"What is wrong with the inspiring hymns with which we grew up? When I go to church, it is to worship God, not to be distracted." This is not a response to Exeter Cathedral's videogame enriched service last night, but an ancient letter written about the use of a "newfangled" pipe-organ in a service.

As Henry Bruinsma wrote "Within a period of less than 100 years, concerning the use of the organ in worship services the iconoclasm of the 1560's [gave way] to the general acceptance of the organ by the Church by 1640." It seems that someone beat us to it. The use of something very new in amongst the very old church traditions has a long a prestigious history.

Video-games aren't supposed to be meaningful, religious, corporate or sacred, we all know that. They are entertaining, exciting, sometimes violent and usually expensive. Increasingly though, I come across games that seem to have forgotten this, that aren't playing by these rules.

There are green shoots of more mature experiences that foreground what gamers have suspected all along -- there is more to videogames than entertainment. While Grand Theft Auto and LA Noire grab headlines because they look like films, there are actually a cohort of games that stand out because of their ability to address grown-up themes in a totally new way.

As I've written in my reviews for Thirdway magazine, games like Limbo, Flower and Uncharted 3 stand out because they are "about" something more than excitement, adrenaline and reaction times. They use interactions to tell the story of being human in emerging and ground-baking ways.

Having laid down the gauntlet in my TEDx talk, for a new "Priesthood of Player-Critics" who engage with games on this level, Exeter Cathedral stepped up to be a most unexpected partner in my experimental journey into a world where videogames are meaningful stories in their own right.

We finally got somewhere yesterday. I helped the Cathedral clergy incorporate the videogame Flower in their evening service. They had the theme of creation and were looking to include a game that would not only work with this but provide a participatory element to the worship. Once they had seen Flower plans grew to use the game as a thread running throughout the entire service. The videogame would be front and centre, much as the pipe organ it stood near.

They decided to project the game behind the other elements of the service and I suggested that we could pass the controller around the congregation each taking turns, playing a part in the journey, collecting our swarm of petals as we went.

The stage was set and technology setup in the grand old building. The hour arrived and people began arriving, lots of people. Extra chairs were swiftly found. An air of excitement and intrigue was in the air as the service began. 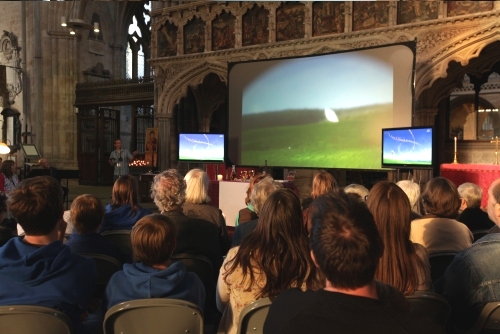 That much I had anticipated, what I hadn't bargained on was how moving and appropriate the experiment was. The game sat comfortably alongside the other elements, and although at times distracted a little more than made up for this with moments of holy-synergy as its events complemented the congregation's other passage through Eucharist, worship, reading and singing.

There was very little shock or oddness to the whole affair. In fact it felt as this was the most natural thing in the world to be doing. Anna Norman-Walker, a Canon at the Cathedral opened proceedings:

We chanted Veni Sancte Spiritus as a congregant tilted the DualShock 3 to visit the circle of red flowers at the top of the first hill. The camera withdrew and the hill bloomed green as the red of each petal ignited thoughts of blood and sacrifice and renewal. We travelled on into the following field bearing with us the first flashes of red petals from those flowers. 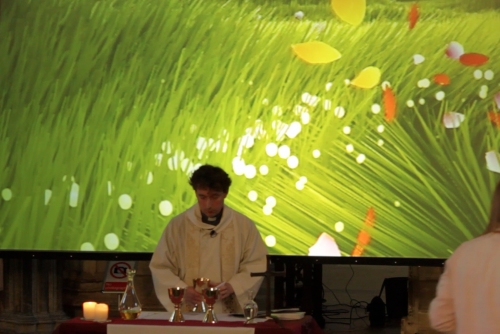 Using this kind of religious language to talk about a game all sounds mildly suspicious I know. But rather than a heavy handed colonisation of the videogame for purposes of the church, there was a playful back and forth here. Christian ideas of sacrifice danced with the game's rendering of an enlivened hillside. The certainty of hope benefited from the game's chaotic journey and uncertain destination.

The game benefited too. Its perfect rendering of the world was granted presence and history in the old building. Projected through the arches of the cathedral, obscuring the screen in places, integrated it with the history and design of the ages. Its sound of wind and chimes and orchestra felt all the more noble and fitting as they echoed round the many chambers of the Cathedral.

Tip-toeing around as this was all going on, capturing footage and photos of the event, it felt like a first step into a new place. Playing beneath the great pipes of the Cathedral organ it was impossible to ignore previous negotiations around technology in these places of worship.

The 100 years it took from the first use of a pipe-organ in church to them being widely accepted, reflects how early the church was to start using this ground breaking technology. It was a relationship that helped the organ on its way as a broadly experienced form of music.

Videogames could well be another conversation on this liturgical journey. This is real significance of the Cathedral's use of a PlayStation and Flower, the videogame is the real winner in this relationship. While there may be some novelty and short-term influx of attendance (and headlines), the church grants videogames many more benefits than it gains itself.

Games are changed by being used in spaces like the Cathedral. As people of all ages (from 10 to 70) played Flower the response was one of enjoyment, surprise and intrigue. Was this what videogames were like? In a moment they could no-longer be seen as something that is merely entertainment, juvenile or even dangerous. Instead they become undeniably interesting and engaging for adults as well as children.

Images from the Event 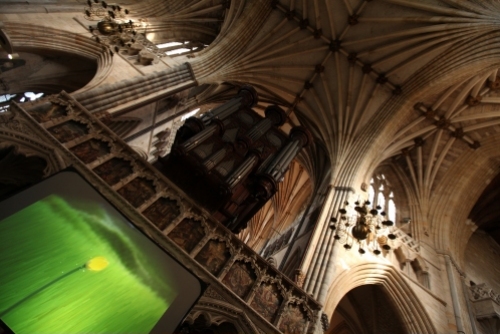 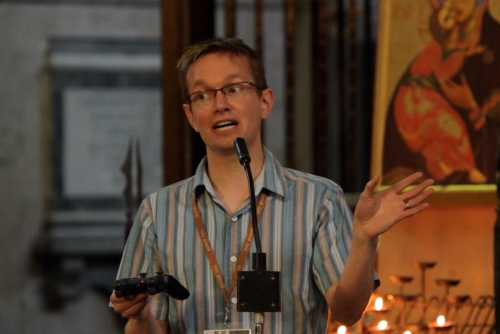 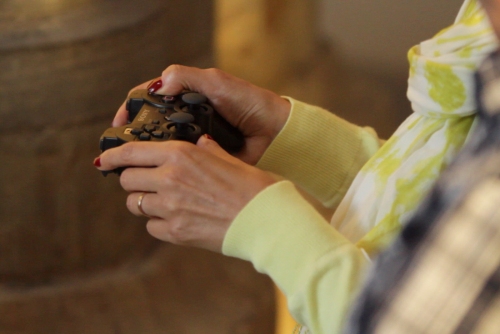 Press Coverage of the Event