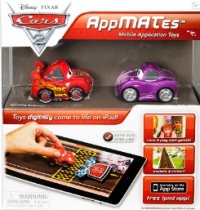 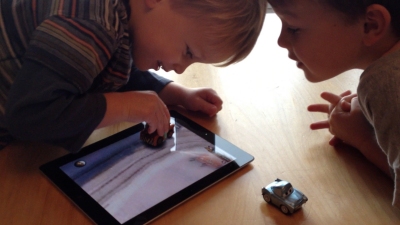 Cars 2 on iPad comes with its own controller, a toy car. There is much more to this Car controlled app than meets the eye, and it's all tailored for younger players.

Some objects naturally lend themselves to being turned into toys. Those that do seem to access a universal language of play. If one of my boys finds a stick while out on a walk it is instantly either a bow and arrow or (more likely) a gun -- never a snooker cue, fishing rod, broom or even a walking stick.

While this may say something about the milituristic culture they are growing up in, I think it says much more about their instinct to mimick grownups and make connections between the things around them and the explosion of imagination and ideas inside their heads.

AppMATes hook into this instinct perfectly by enabling them to control the Cars 2 iPad game by simply whizzing the car along the surface of the device. It works well. I could tell even after watching them for a few minutes they were lost in an imaginative world where their sound effects and extension of the actual game was as real and engaging as anything the designers may have intended. (Although, I suspect the game is designed to be loose enough to encompass this sort of open ended driving world play.)

To play the game (which is free) you need to purchase the AppMATes cars (the MAT stands for Mobile Application Toys apparently)which are around GBP 10 each. Download Cars 2 AppMATes (iTunes) on your iPad and start the game, lay it flat on a table, place the AppMATes car in the centre and place it in front of your child. Without any direction or interferance they will be able to explore Radiator Springs, go on missions, races and collect hub caps. You can create a paper template alternative to the toy cars, but this really misses out on a big part of the fun.

While not perfect, controlling the game with a real Matchbox sized car removes the complicated language of buttons and sticks, and replaces it with interactions that my kids use everyday in their imaginative play. The game tracks the movement of the car on the sureface of the iPad and draws the world around it. Move forward slightly and it accellerates, sweep left or right and you can turn.

It lets the player jump, spin, slide and twist the car without it causing a problem.

The clever thing is that rather than try and replicate a traditional racing game, AppMATes Cars 2 lets the player jump, spin, slide and twist the car without it causing a problem. This makes the game feel much looser than a stick or wheel controlled experience, but that is no bad thing as it accomodates really young players -- my four year old had no trouble playing it as you can see in this episode of Family Gamer TV.

Beyond the basic novelty there are some very nice touches. You can view your toy car in a drive through mirror to see what powerups and upgrades you have -- this further blurs the boundary further between the toy and the game. When it's nighttime your car projects headlight beams onto the road in front of it, and the lights on the toy car also light up. You can switch your car to a different model and the game responds instantly, just like Skylanders Spyros Adventures.

There is plenty of depth as well. Not only can you upgrade and enhance your car in all sorts of ways, you can also work your way through a series of quests and races like you would in a traditional game. As well as this there are a range of different cars you can buy, each with different engine sounds, horns and effects in the game.

The biggest complaint that my kids had was that the toy car's wheel didn't go round. I think they had a good point, although I suspect this is part of them being "iPad Safe" which I understand to mean that they won't scratch that rather expensive screen.

They were also a little dissapointed not to be able to play with two cars at the same time. With the iPad being multitouch I imagine this would be possible technically although as it already occassionally struggled to desypher their rapid movements perhaps this would be a bridge too far as well.

His little fingers and instinct to move the car around more seemed to do the trick for him.

Bigger fingers also seemed to be less suited to controlling the diminuative cars. You see you have to hold the cars by the passenger and driver windows to control them -- I'm still not exactly sure why -- and my big stubby fingers were a bit too inaccurate at times.

My youngest son actually got on better than the others. While they had a problem now and again getting the AppMATes cars to register on the iPad, a combination of his little fingers and instinct to move the car around more seemed to do the trick for him. He was chuffed that we had to ask him to get it started from time to time, usually it's the other way around.

It will be interested to see how they develop the games going forward. With the iPad being connected to the Internet there is all sorts of scope for seasonal content. The game had a winter theme while we played it, I expect this will change as we head into spring and summer. This really could become the Animal Crossing of iPad games.

You can support Andy by buying Cars 2 AppMATEs