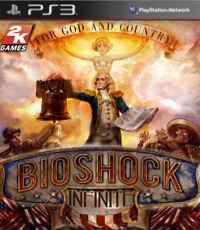 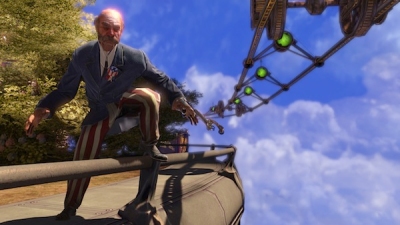 BioShock is something of a watchword amongst avid gamers. It was a game that not only played very well but created a greater sense of place and atmosphere than any of its peers. Bioshock Infinite hopes takes the good work of the first game, as well as the more recent follow-up, from the waters of Rapture to the new sky city location of Columbia -- another society on the brink of implosion.

Last week at E3, Irrational Games unveiled more of Bioshock Infinite story with a hands-off demo and exposition from Creative Director Ken Levine. In a suitably adorned steam punk screening room we got to grips with the new setting of Columbia.

This was a floating city that was intended to perpetuate the American dream. However, as is the way with utopian dreams, things started to go wrong. This came to a head when officials opened fire on a group of Chinese civilians. The floating city was then politically cut adrift as the US government sought to distance themselves from the vigilante nature of the commune. In response Columbia cut its physical moorings and became a wandering renegade community, getting by with what provisions it could extract from the populace below.

As the demo rolled it was clear that Columbia itself was now a conflicted space. Two factions had developed and each wanted power. The Founders, lead by a character called Comstock, changed the city's propaganda remit into something less hospitable to newcomers in an effort to protect their way of life in the clouds. The Vox Populi then emerged to offer an alternative to The Founders that was intended to be peaceful but soon had to take up arms to get their point across.

In the game you play Booker DeWitt, an ex-Pinkerton detective who has been hired to rescue Elizabeth - a women being held hostage in Columbia with only a mechanical metal bird for company. Once rescued, DeWitt and Elizabeth spend their time on the run from the bird while trying to get to Comstock's tower -- in the hope that he will be able to unravel the mystery of Elizabeth's supernatural powers that seem to be tied to the fate of the city.

There is a spiritual succession from the original Bioshock.

We watch as DeWitt and Elizabeth make their way through a ransacked junkshop looking for money and firepower. The relative calm of the store is shattered as the giant metal bird tears through the building in an effort to get to Elizabeth.

It's here we get a chance to see some of the new gameplay elements in Bioshock Infinite. Elizabeth can make use of what she describes as "tears" to manipulate reality. She places her hands in these tears and forces them open with great effort to reveal another place and time.

There is simply too much to take in straight away and much of the detail washed over us. But what is immediately apparent is the detailed work that has gone into making this floating city an interesting and believable place. This is wrapped up in a quirky and imaginative rendering of reality that reminded me of The Chaos Engine from the 16-bit era.

In terms of combat, there is a spiritual succession from the original Bioshock. You again have two attacks that combine firearms with a range of special powers. Now though, these powers are acquired by drinking tonics rather than injecting plasmids. A couple of examples we get to see in the demo are "Bucking Bronco" that sends enemies flying into the sky and "Murder of Crows" that directs a flock of attack birds towards a particular target.

At any moment in the combat and exploration DeWitt can also grab onto the monorail transport system with his sky-hook and fly around the place. This alters gameplay substantially giving things a much more frantic feel, as well as offering a quick escape route should one be needed.

It is the dialogue and incidental moments that are most striking.

While these elements combine impressively in the fighting sections of the game, it is the dialogue and incidental moments that are most striking about the Bioshock Infinite E3 demo. Although Elizabeth is on almost on the comical side of busty, the concern and fear in her eyes at the threat that haunts her is genuine and moving.

One particular moment she faces DeWitt and places his manly hand around her throat, making it clear that if he is unable to defend her she would rather die than be re-captured. Then, a little later Elizabeth is faced with the reverse scenario as she stumbles across DeWitt about to be killed by her mechanical keeper.

In a moment that draws powerfully on the story to date, Elizabeth calms the bird by agreeing to return with it to captivity and a life she obviously abhors. By so doing DeWitt is spared and the demo fades out.

BioShock Infinite should be able to stand shoulder to shoulder with the original.

Although at times BioShock Infinite still feels a little heavy handed - in our 15 minute demo at least - there is more than enough intrigue and genuine emotion here for it to be an enticing proposition. Provided Irrational can muster the finishing touches that polished the original into something special and can lie to rest some of the rough edges, BioShock Infinite should be able to stand shoulder to shoulder with the original - something that BioShock 2 wasn't quite able to do.

You can support Andy by buying BioShock Infinite