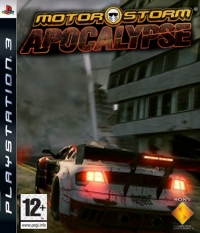 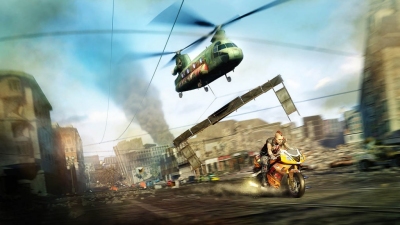 Motorstorm Apocalypse PS3 is appropriately delayed. Beyond the painful parallels however, there is only the memory of a great game. The majestic environments, track deformation and vehicular variety are all still present, but now they have to compete with the problematically realistic natural disasters and catastrophes.

I'm always a little reticent when a favourite band makes it big. What was previously my musical secret becomes distracted with the world at large. A world that I suspect doesn't understand or appreciate them quite like I do.

Motorstorm was my launch title love on PlayStation 3. Heading off into deserts and canyon drop-offs with a multitude of trucks, bikes, buggies and big rigs is the memory that defines this generation of consoles for me.

Motorstorm Pacific Rift followed soon enough to perpetuate the glee of bat-shit-crazy racing through decaying environments abandoned by humanity but perfect for thrill seekers. The scale was bigger, jumps more massive and landings ear-piercingly dramatic. Modes and vehicles expanded to match the world, and of course the split screen went four-player.

Since then though the PlayStation has seen numerous games crowding in on the fantastical racing genre. While Pure, Fuel and Blur struggled to meet the furious pace set by Motorstorm's speed over detail ethos, Split/Second not only matched this but with a visual that outshone it in every department.

Motorstorm Apocalypse is more than slightly aware of this, and makes the retrospectively problematic mistake of pursuing the pack rather than carving its own route to a third iteration.

The Motorstorm I loved blazed a trail of new ideas and adrenaline.

This is a problem because the Motorstorm I loved blazed a trail of new ideas and adrenaline. The howling wind of the sea, rupturing of streets and toppling buildings are as impressive and threatening as they should be, but they feel like a less predictable version of Split/Second's tricks and trade.

But more than this, in light of recent events, the move from fascination with the Pacific islands to channeling the power of nature took Motorstorm into deep water. Amid much greater humanitarian concerns the plight of the developer may not register. Fare enough, but it must be tough for people who worked on the game to see its release overshadowed by the unforeseen events in Japan.

While we wait for an official launch date to materialise, assuming Sony is willing to go there again, there is actually plenty to celebrate in Evolution Studios game. In particular, playing in 3D grants the experience the sparkle that separated the original from other launch titles. The world comes alive again, like it always was in my memory, and I can appreciate the variety and scope of racing on offer once more.

Unlike the cardboard cutouts of Killzone 3's first-person 3D rendering, Apocalypse makes more subtle use of the added depth. I am more aware of different vehicles as they fly past and the broken blacktop gains texture. But more than this, Motorstorm weaves the 3D world into the experience as a whole.

Where Gran Turismo 5 impressed with 3D interiors, Motorstorm Apocalypse keeps its sights squarely on the world you are driving through. By doing so it recreates that thrill I remember discovering the first time I played the series.

I can still see Motorstorm's genius shining through.

It's a reminder that Motorstorm, although it looks like an everyday racer, is actually a very unusual game. Apocalypse has you weaving in and out of different routes round the world searching to find the course that best suit your current ride. And beyond the catastrophic collapse and attacks, the world still deforms around you, becoming muddier, more broken and furrowed with each lap. There are still more vehicles on offer here in each race than most games have in their entirety. And again it has the only four-player split-screen mode in any PS3 or 360 racing game.

What there wasn't however, was the confidence that this would be enough for their third release. Like that indie band I loved before anyone had heard of them, I can still see Motorstorm's genius shining through but I'm aware there are now a lot of fickle distractions in the way.

Even the cut scenes and introduction seem to fall under this spell - lacking that classic extreme sports feel of the previous games - as they try and stitch together more of a story for the player.

Motorstorm, in becoming a high profile franchise, has yet to negotiate an interesting way forward for itself. By no means a bad game, but one in two minds about what made it great in the first place.

You can support Andy by buying Motorstorm Apocalypse