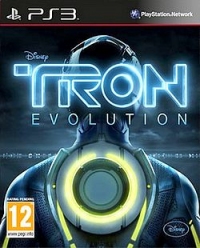 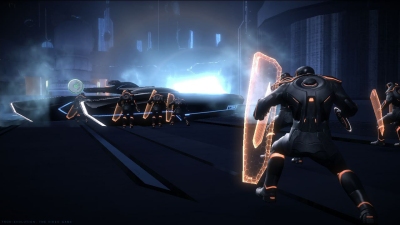 Tron: Evolution creates a muted Parkour playground ripe with possibilities. Its intelligent approach to multiplayer and consistent gameplay elements result in a convincing, and ultimately quite moving, experience.

Tron: Evolution is the adventure-platform game tie-in for the new Tron: Legacy film. Like Assassin's Creed, Mirror's Edge and Prince of Persia, it is heavily influenced by the sport of Parkour/free-running. This is something that sounds a little odd at first, but actually fits the film very well.

I remember watching Tron when I was growing up and being enthralled by its fantasy world. Maybe because of the special place it still holds in my imagination, and because movie tie-ins don't usually result in very good games, I was a little wary of how Tron: Evolution would turn out.

You play a security program made by Kevin Flynn. When the corrupted Basic CLU goes to war against the ISOs, the recently introduced sentient programs, it's up to you to save the day (ed: come again?).

More than the jargon infested narrative though, it's the visuals that really convinced me I was playing in an electronic world of bits and bytes. Tron: Evolution succeeds because its cyber world has a real sense of place. The enemies move with the staccato gait of a computer program while your journey through the space is smooth and flowing - wall running, cat crawling, vaulting and gap jumping.

Although not first person, the combination of its restricted palette and the physical movement through the environment really reminded me of Mirror's Edge. I've seen a variety of mods for that game to turn it from a first person to a third person platformer, but they needed have bothered as Tron fits the bill perfectly.

Parkour movement is integrated into the fighting in intelligent ways.

There is more fighting here than in Mirror's Edge though, and probably because of this it's much more functional. You're equipped with a light-disk to throw at enemies that can also be used in close range to simply hit them. As you work through the game you are granted more moves and combos. This keeps the combat fresh and ensures the odds are usually well balanced.

The clever thing here though is that the Parkour movement is integrated into the fighting in intelligent ways. You can vault over rechargeable stations to power up your disk or wall-run through energy zones to regain health. This not only spices up the combat but creates a continuous experience, where your free-running relationship to the environment is always maintained.

This may sound like a small thing, but in this sort of videogame consistency of interactions can really make or break the experience. By following through on the Parkour conceit the developers create an emotionally engaging world - in the same way that narrative must be attended to in films and books to generate an affecting story.

There are other types of levels to break up the platforming. Light-cycle sequences are iconic for the movie and work well in the game. It took me a while to nail the precision they demand, but with a regular supply of checkpoints even my son found he could progress satisfactorily. He particularly enjoyed using the Move controller to steer the bike - holding it like a pair of handlebars.

But more than the Move controls, the most successful novelty of the game is its approach to multiplayer. My kids often struggle with multiplayer modes on PS3 and 360 games, particularly where the focus is online rather than split-screen. They will give it a go for a while but eventually give up after being beaten by other players who have obviously played the game a lot more than them.

Tron: Evolution PS3 eases you into the multiplayer gently.

Tron: Evolution PS3 eases you into the multiplayer gently. Initially you play the modes against AI-controlled opponents. This gets you started with how things work. Then, as you get better you are slowly introduced to real human opposition. It was a simple idea but one that has meant they have got on much better than usual - and yes, it helped me on my way as well.

These elements come together to create an experience that not only complements the films (old and new) but that also sidestep the usual traps movie tie-in fall into. There is enough here to keep my hard core gaming glands happy, while at the same time providing something my older offspring can enjoy.

You can support Andy by buying Tron Evolution