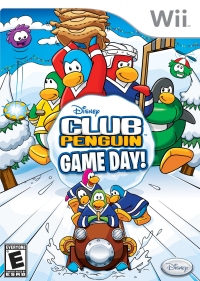 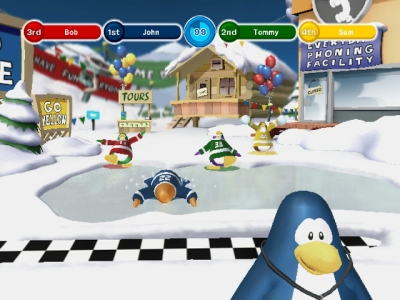 Club Penguin offers a taste of Disney's online multiplayer web game. The minigames lean heavily on the franchise so that players need to get into the web game quickly for it to keep them interested on the Wii.

Bright colourful fun Penguins offer a rich playground setting for Disney's latest minigame tie in for their online phenomenon. Like the Penguin Club DS game, Disney continues its trend of high production values. But rather than the metal melting of Split/Second, it's of course saccharine and child focused.

We hadn't played the website game in our family so we skipped the optional linking to your online Club Penguin account and created fresh penguin characters for each of our three kids - up to four can be accommodated.

There was then a choice of the Story mode - a combination of exploration and minigames - of jumping straight in for the quick start Multiplayer mode. As you work around the point and click overworld you can find items to take back to the online website game as well as the different minigames that in term offer more prizes.

This navigation was a little contentious at first as our kids all wanted to go different directions. But a few parental interventions later and they settled down to taking turns choosing. This worked well, but felt like we were doing some of the legwork the game could have handled itself.

Game play is squarely aimed at the novelty of playing with the popular animated Disney penguins.

The minigames themselves each involve up to four players and a mixture of Wii-mote pointing, gestures and button pressing. Game play is squarely aimed at the novelty of playing with the popular animated Disney penguins, but this was a little slow to get going in our family, not having had much experience with the franchise previously.

The overworld areas are well formed but again were a little frustrating for my oldest daughter who wanted to explore rather than jump straight into games like her brothers.

A series of games can be selected to avoid returning to the map between rounds. Again the boys seemed to favour this more direct approach not really connecting with the characters like their sister.

It is the marrying of console game play and the online world of Club Penguin that makes most sense of Game Day on the Wii though. Without that angle it is simply a collection of pretty minigames, which in themselves feel a little dated.

The boys soon wanted to setup accounts on the website to see what they had won on the game.

We certainly had some fun with the game, and the boys soon wanted to setup accounts on the website to see what they had won on the game - completing levels grants tokens to be used in the web game. But my daughter still preferred the more adventure focused experience of the Club Penguin Elite Force DS and Herbert's Revenge DS games that offer more of a point and click adventure story alongside the minigames.

You can support Andy by buying Penguin Club Game Day