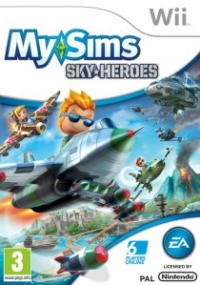 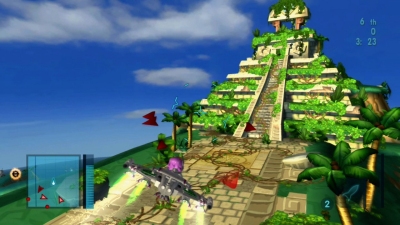 MySims Sky Heroes Wii gets away with mismatching cute visuals and challenging game play. More hardcore than it looks skews this towards older family members who don't mind the block-headed cartoon aesthetic.

With Wii-Sports Resort flying such a success and Pilotwings Island 3DS coming next year, MySims looks to get in on the flying action with Sky Heroes.

Like MySims, MySims Party and MySims Racing, MySims Sky Heroes offers a simlish infested take on flying, racing and collecting your way around its island setting.

Although the look of the game is quite kiddie, again like the other titles in the range, this is a challenge for even experienced players. Full on flying combat and air-racing needs a deft touch and persistence. Our three year old is able to play Wii-Sports flying but found this a bit too hard. For the older kids (seven and up) it was ideal though.

A Story mode takes you through the different challenges via a world map. This is complimented by a Quick play and split-screen Two player mode that offers head to head racing and combat.

Using the Nun-chuck to steer and Wii-mote for weapons and special moves makes it feel more like the full-on flying of HAWX than looks would have you believe. Moving to this from the simple left and right driving of games like Mario Kart took my avid gaming seven year old a bit of getting used to.

The game works the cute cartoon angle hard to lessen the high impact action, but there is no escaping the warfare nature of the challenges. Machine guns, missiles and laser beams proliferate at players work to take down their opponents.

"Those guns aren't loaded with conversation."

Some of the Sims in the game are at least aware that diplomacy may be a better option. If you read the lengthy dialogue there are some dissenting voices amongst the general call to arms - although most will be skipping past the lengthy disposition for brevity. "Those guns aren't loaded with conversation." retorts one pilot while other dialogue suggest as defensive rather than aggressive reason for the fire-fights.

Coming to this from the other MySims games lends Sky Heroes Wii a sense of both quality and familiarity. With EA's ongoing commitment to the franchise my family has got to know the various characters and general approach to gaming that MySims offers - full games with simplified visuals and controls.

Sky Heroes looks impressive with night missions lending a classic flight simulator air of dusky atmosphere. The MySims characters here are largely new though, and our kids missed seeing some of their favourites - like the king and chef from the original MySims.

It's a shame there is no four player mode like MySims Racing. The difficulty also ramps up pretty quickly for a family audience. I would also have liked a father-son play mode that works so well in HAWX2 on the Wii. But otherwise this is well suited to Junior gamers in the family.

A DS version offers a similar, if less populated, experience. The main game modes and story are the same, although the environments in which you fly lack the impact and range of the Wii version. While it is nice to play on the go, the higher quality Wii game and lack of interactivity between the DS and Wii versions (ed: no features like Batman The Brave and the Bold then) make it a limited distraction from the main event.

Although shifting balance back towards visuals makes MySims Sky Heroes slightly choppier and more complex than Wii-Sports Resort, it also creates something more compelling. MySims is as endearing as ever and here takes another step towards establishing itself as a brand with longevity.

You can support Andy by buying MySims Sky Heroes