Batman The Brave and The Bold Wii Review

Batman The Brave and The Bold Nintendo Wii 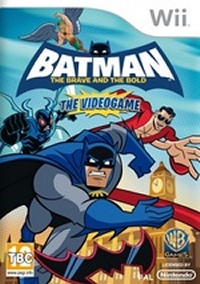 Further reading:
Batman The Brave and The Bold DS 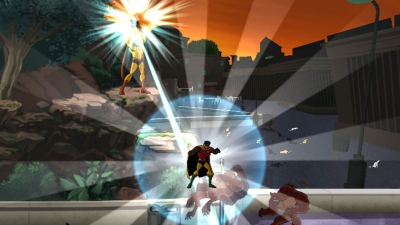 Batman The Brave and The Bold is brim-full of co-operative fighting fun. Although at times repetitive, playing together with two kids on the Wii and one on the DS turns this into more than just a Batman branded novelty.

Batman is a favourite superhero in our house, I think the kids connect to his parental demeanour and nifty gadgets. But as Batman Arkham Asylum showed, underneath the superhero sheen is a vigilantly ethic I'm not quite as comfortable with. It makes him a much more interesting proposition for me, and one I'll look forward to discussing with the kids - but not until they are a little older.

Batman The Brave and The Bold Wii takes things back towards the Saturday morning version of the caped crusader - sweeping mob-rule issues under the carpet. While its use of the Batman branding is somewhat arbitrary, the attention to multiplayer game play and bright visuals make its old school platforming work well.

WayForard are used to walking backwards, both Contra 4 DS and A Boy on His Blob Wii were pleasingly retro. And with Batman they strike a well observed camp innocence that simply couldn't exist on TV today without qualifying innuendo. And all that in a game with one eye on how things used to be done.

The side-on 2D platforming has a drop-in co-operative play so another player can join or leave the action at will. Partners start with Robin but soon open out to include Hawkman, Blue Beetle and the Guy Gardner version of Green Lantern.

Amongst the jumping, running and melee is a dose of brawler combo attacks and special weapons.

Other characters can be brought to the fight by pressing the 1 button once their portrait refills. If you waggle the remote enough the likes of Plastic Man and Aquaman offer smart bombs and other mass attacks. The player controlled characters also have their own special signaled with an animated sequence that adds a bit more "comic" to the game play.

Amongst the jumping, running and melee is a dose of brawler combo attacks and special weapons. Combat is frantic, but still requires accuracy and skill from the player. Of course the enemies come thick and fast, but at times even my kids found this a bit repetitive. "We just killed these guys a minute ago" seemed a fair comment on the fifth wave of identical henchmen.

Batman The Brave and The Bold DS may be of more interest to core Batman fans as they wait for Arkham City. This takes WayForward's love of real retro game play a step further. Rather than dressing things up as a modern game, on the DS it looks and plays like a 90's platformer.

Amongst the jumping, running and melee is a dose of brawler combo attacks and special weapons.

The DS game can also link up with the Wii game offering the chance for the third player to join in the action. This is ideal for younger siblings who can use the DS to control Bat-mite on the Wii and contribute special attacks to help the other two players progress.

Batman the Brave and the Bold puts the effort in to create a compact co-operative platform game. There are guns and fists aplenty so this isn't for the very young, but as a caped crusader alternative to the dark night it is a perfect fit.