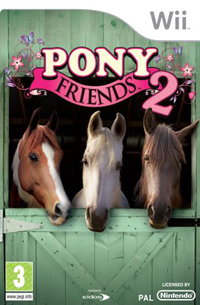 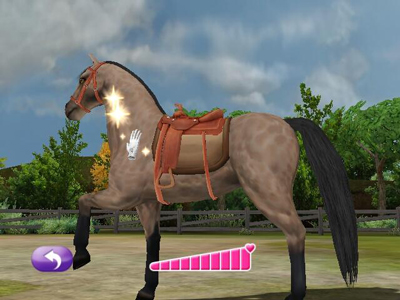 Pony Friends 2 for Nintendo Wii continues the successful formula that made the first game such a hit with my kids and allowed them to create or adopt their own personal Pony.

They had great fun caring for their horse and taking part in all the activities and races they could find. Though it didn't appear particular deep or expansive to me, both my kids were fully engrossed in every aspect of this game from grooming to accessorising their faithful friend.

Starting off with a gentle introduction to the controls and the places you can visit I was struck with the quality of the visuals and how easy it was to ride my new pony. Using the Wii-mote and the Nun-chuck motion controls to send the pony from a slow walk into a gallop was great fun, especially as the motion mimicked the holding of the reins at the same time. Before long my daughter picked it up immediately and was soon turning round, jumping over logs and even taking photos of interesting wildlife with ease by pointing the Wii remote at the screen and pressing the appropriate button.

There's also a good range of events to take part in but the most important part of Pony Friends 2 is caring for your steed after each of these events. Here you groom their coat, maintain their hooves and feed them in order to keep the relationship going well.

What I noticed when comparing the Wii and DS versions was how tricky customising your pony was when using the Wii remote. The simply method of using a stylus is much more preferable and although the visual spectacle of the game is greater on a TV, the DS offers the greater amount of control and precision that suited my kids better.

What I noticed when comparing the Wii and DS versions was how tricky customising your pony was when using the Wii remote.

Money can also be spent on a tonne of collectable content to accessorise your pony. This was probably my daughter’s ultimate goal as I always saw her on this screen obtaining a near-endless variety of decorations or saddle-gear for her pony. I noticed that some even gave her a hardiness or happiness boost if worn - a nice little touch that added a bit of strategy into the game even if it was very lightweight.

The manner with which you build a relationship with your pony by grooming, petting and feeding is all reminiscent of Nintendogs and makes for Pony Friends 2 strongest attribute. There's enough range and variety of accessories that had my kids endlessly customising their pony and got them attached to their own creation in the same way Nintendogs had done before.

my kids enjoyed the prospect of racing against a single friends and the trading feature meant their hard work in the pony creation/grooming section paid off well.

The multiplayer racing side of the game wasn't as great as I initially thought it might be. You can race against a friend but any epic vision I had for a large number of horses all competing at once was quickly crushed. That isn't to say the system didn’t work well - my kids certainly enjoyed the prospect of racing against a single friends and the trading feature meant their hard work in the pony creation/grooming section paid off well.

Pony Friends 2 for the Nintendo Wii is an excellent Pony simulator for young kids and I know my two children loved almost every moment they spent with the game. It looks great, the controls are easy to pick up and the depth with the collectables and the variety of racing was surprisingly engaging.

You can support Andy by buying Pony Friends 2