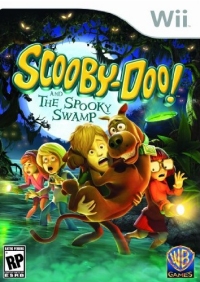 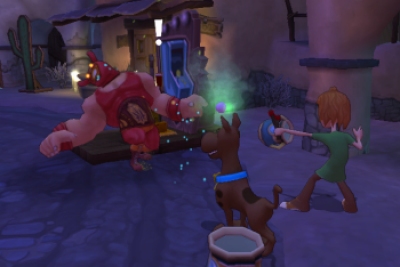 Scooby-Doo and the Spooky Swamp returns us to the light-horror mysteries that made the original series such a success. Co-op play and no Scrappy make this a game the kids let me get away with.

Scooby-doo is a clever series for kids. By combining comedy and earnest characters in a range of situations from the ridiculous to the seriously scary it appealed on a number of levels. I remember watching it when pretty young, being a little bit scared of the ghosts and ghouls who "would have got away with it".

My kids haven't really clicked with the series though. A combination of the original cartoons now looking dated and rarely broadcast, and the miss-step of introducing Scrappy-doo who managed to upset the horror-comedy balance of the original.

Whether things have improved since Scooby-doo First Frights Wii I'm not sure, but I seemed to get on better with this game than Mark. Scooby-Doo and the Spooky Swamp was just the ticket for me. Sensibly sidestepping the miniature side-kick, it creates a game that really feels like Scooby-doo. Sure, the characters themselves have had a bit of a make over and don't quite seem like the real thing, but the general spirit of the cast is captured perfectly. It's a little like going back and watching the original Simpsons episodes - there's an eerie not quite right quality - and here it hooks right into the mystery motif.

The game is a puzzle-platformer with a good dose of brawling. This is not a million miles away from the game play of the Lego videogames. You have to select appropriately skilled characters to get past certain obstacles as well as collect and deliver a range of items to progress. It's not quite a tight and streamlined as the Lego games, but there's still a lot to enjoy.

Playing co-op mode with the kids worked well. The controls have been sensibly implemented. There is some use made of the Wii-mote's gestures, but not overly so. These are limited to things like directing a torch to explore the screen, or moving your inventory around. This leaves movement to the Nun-chuck with C to change characters, and Z to pickup objects - A is to jump and B is attack if you are interested.(ed: not so much).

Although at first it seems that a lot of the game play is about fighting your way through the various enemies, we soon discovered you don't really need to fight them. Much like the stars of the TV show you can actually get by with a lot of running around simply avoiding the bad guys. I'm not sure if this was an intentional nod to the series, but it felt right either way.

As you go you collect Scooby Snacks to buy new accessories and clothing to customise your characters. Although I wasn't all that keen at these distractions, it actually turned into a game in its own right for my son - who obsessively hunted for every last snack he could find.

It's just what I've been waiting for - a way to introduce my kids to Scooby and friends.

The game was quite short, although afterwards we did go back and check we hadn't missed any collectibles - my son insisted again. The focus is more on an authentic and intense game than one you have to grind out for hours. There is a real sense of mystery to the proceedings - nurtured through both game play and narrative - that felt very fitting for a Scooby-doo title.

There is a DS version of the game that some may prefer for its portability, but I think we would miss the co-operative play that is only found in the Wii version.

Scooby-Doo and the Spooky Swamp doesn't shout innovation from the rooftops, but for me it's just what I've been waiting for - a way to introduce my kids to Scooby and friends while having plenty of fun along the way. It's worked well so far, we have evening been watching the Original Scooby-Doo episodes on YouTube.