Scooby-Doo and the Spooky Swamp DS 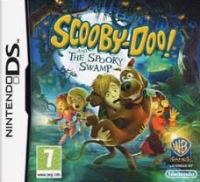 Further reading:
Batman The Brave and The Bold 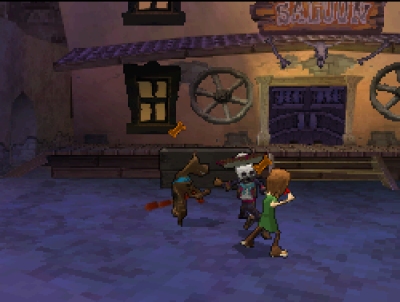 Scooby-Doo and the Spooky Swamp sticks commendably close to the original show's format. But if you don't have warm fuzzy childhood memories to bolster the mystery antics, it becomes a Scooby themed single-player version of the Lego DS games.

Scooby-Doo and the Spooky Swamp went a little over my head. I've never really "got" why the cartoon was so popular. I have the feeling that because there was less viewing choice back then, having any cartoon with a mildly grownup theme was an exciting idea.

These days though, with a whole range of scary cartoons to choose from I don't think Scooby quite has what it takes. Sure, he's always going to be a cultural icon with his universally imitated catch phrases "Shaggy" and "I would have got away with it too..." but the series itself shows its age.

The game seems to follow suit. While it has all the right elements for a decent puzzle adventure game, there is so much competition now that time spent on it left me feeling I'd actually prefer to have played something else.

The biggest problem here is the Lego DS games. They offer a very similar mix of running around collecting things, changing characters to match a particular problem with a bit of fighting thrown in for good measure. Scooby-Doo and the Spooky Swamp delivers all this, but on something of a more modest scale. The puzzles aren't quite as challenging and the environments feel rather spares by comparison.

It comes down to whether you like the show in the first place.

What it probably comes down to though is whether you like the show in the first place. My displeasure at it all was probably cemented by having Scappy-Doo forced into pretty much every episode I have ever watching. What is he doing there? It seems like such an obvious trick to try and update a flagging idea - a bit like the equally bizarre Muppet Babies.

The biggest problem with the DS game though is that it has no no-op play. This turns what can be an engaging - if over familiar - experience into something a lot less appealing. Including this, or some way to link up the DS and Wii games would have been ideal - like they did for Batman The Brave and The Bold, that was awesome.

The biggest problem with the DS game though is that it has no no-op play.

It's certainly not all bad. I enjoyed getting a fresh take on the idea of the cartoon - and actually, having played it, I can see why this was a compelling idea in the first place. Rather than having the experts or grownups come in to solve the kids themselves get to sort things out - admittedly they were pretty grown-up looking kids but you get my point.

Scooby-Doo and the Spooky Swamp although well put together, should probably be reserved for real fans of the cartoon. Like the show, there are now much better examples of this kind of thing to enjoy. The Lego games to name one.