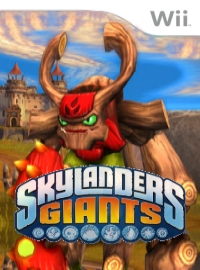 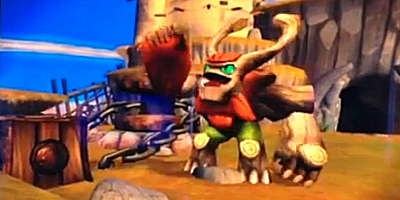 Skylanders Giants review of what we know about Giant, Light-Core and Reposed figures. There is a surprising amount of detail available for this already if you know where to look. We've asked Activision for confirmation of the following and will update as we get more information.

Skylanders Giants was announced back in February at the New York toy fair. Since then there has been plenty of buzz around the new game, and what it means for the Skylanders figures we currently play with. Most recently details about LightCore and differences between Series 1 and Series 2 figures have been appearing.

While it will be a long time before we get to review the game itself, I'm going to spend time reviewing what we know about Skylanders Giants and what implications that has for those wanting to plan pre-orders of the current figures and Giants when that is available.

With so much information it is hard to know where to begin, or indeed where to stop. I'll tackle Skylanders Giants by grouping the information into the following categories:

Skylanders Giants is not only a new adventure but introduces Series 2 toy figures. These include the new Giant figures, new Normal Skylanders and a re-release of Series 1 figures in new poses. The original Series 1 figures are supported in the new game, complete with any levelling up and hats they have from the original game.

As Alex Ness stated recently on the Media Pulp podcast, the "Series 2 figures will have some different abilities and stats and some uber upgrades that the other ones don't get." When asked, on Media Pulp, about whether ther Series 1 original Skylanders would benefit from these upgrades in the new game Mike Stout clarified "You can level your old [Series 1] Skylanders up to level 15. Kids have a relationship with the old Skylanders and we want them to still be able to use them and have fun with them in the new game. You have new hero challenges in the new game from having those old toys."

Although the Series 1 Skylanders from Spyro's Adventure will get a nice level boost (up to level 15) in Skylanders Giants, to take full advantage of the new upgrades and super powers as well as the increased level cap you will need to purchase the Series 2 versions of the Skylander figures.

8 Giant Skylanders: These Giants figures are about twice the size of the original Skylanders and light up when they are on the portal and are powered by the peripheral with no need for batteries in the toy itself. They offer different stats and abilities in the game. Throwing in game objects, bashing through walls and completing feats of strength also distinguish them from normal Skylanders.

4 New Series 2 Light-Core Skylanders: These new figures light up when they are on the portal and are powered by the peripheral with no need for batteries in the toy itself. These four are new characters for Skylanders Giants and can only be used in the new games.

8 New Series 2 Skylanders: These new figures add one new character to each of the eight elements for the new Skylanders Giants game. They cannot be used in the original Skylanders: Spyro's Adventure game.

32 Reposed Series 2 Skylanders: These figures not only offer a reposed version of the original Skylanders, but they can also take advantage of the higher levelling up in the new game. These figures will work in both Skylanders: Spyro's Adventures and Skylanders Giants.

4 Reposed Series 2 Light-Core Skylanders: These new figures light up when they are on the portal and are powered by the peripheral with no need for batteries in the toy itself. These four are light up versions of existing Skylanders from the first game and can be used in both the original and new games. As Mike Stout recently said, they have "picked the ones that can take the best advantage of lighting up" from the Series 1 Skylanders.

The Series 1 figures from Skylanders: Spyro's Adventures can also be used in the new game, and will bring with them all their upgrades, levelling up and hats. They will benefit from a higher level cap in Giants, but will not have access to "different abilities and stats and some uber upgrades" as stated by Alex Ness.

This infographic depicts the compatibility of the Skylanders figures and the two games. It also shows how the different character groups and releases overlap each other (full size Infographic). Although Skylanders Giants introduces new features and characters, this technology is all in the toy figures themselves -- whether the additional levels of re-released figures and new Light-Core figures. The portal remains unchanged.

If you have purchased the original game you can use the portal from that game with Skylanders Giants. This means that Giants is likely to be sold in both Expansion and Starter Set format, so you don't have to buy it with a portal if you already have one.

Where Skylanders Giants comes to a new platform such as the Wii U or PlayStation Vita a new portal will be required. Skylanders Universe, the online world access via a browser, will continue to interact with figures via the Web Codes included in each pack -- as well as being able to plug in the 360 USB version of the portal to your PC.

Two Giant characters can be used at the same time in the game by placing them both on the portal as you would in the first game. You can also team up a Giant with a normal Skylander or simply play the new game with two normal Skylanders (although there will be points in the game that require a Giant).

The new game introduces eight Giant Skylander characters, one for each element. Although we don't have any specific stats for the giants from interviews and videos of the new game it is possible to get a good idea of how they will compare to the existing characters' stats.

We know that they will be slower than the normal Skylanders. Normal Skylanders speed ranges from 35 to 50, this means that Tree Rex, the first Giant Skylander revealed, will have a speed in the low thirties. The footage of Tree Rex shows him being hit by enemies and taking minimal damage. Normal Skylanders armour ranges from 6 to 34, this means that Tree Rex should have armour of at least 40. From that same footage we can see Tree Rex's Health is 650. The Giant Skylanders are much more likely to inflict greater damage which would suggest their Critical Hit stat will be around the 60 mark.It will be interesting to see if the Giants get a boost in their Magic stat, as this starts at 25 for all existing Skylanders.

These factors come together to suggest that Skylanders Giants, and Tree Rex in particular, will have the following kind of stats (with some normals stats for comparison):

Giants can also perform specific actions that a normal Skylanders character is unable to do:

Throwing: Giants can pick up rocks and other items in the game world and throw them at pre-defined objects, such as walls and enemy generators, to destroy them. This is achieved by pressing C and waggling on the Wii, on the 360 and PS3 this will involve spinning the right stick.

Bashing: Giants can bash through obstructions in the game world to access areas not available to normal Skylanders. This can be a door that is barred by planks of wood or by jumping down on breakable floor sections.

Feats of Strength: Giants are required at certain moments to complete feats of strength that provide access to the next level in the game world. For instance this may involve pulling two floating islands together by waggling the Wii-mote, or circling the right stick for 360 and PlayStation 3.

Giants do have disadvantages over the normal sized Skylanders:

Speed: They are slower and more vulnerable to attack. This means they often have to stand and fight rather than get out of harms way. Also, because they are bigger they are an easier target for projectile weapons to hit.

Size: There are areas in the game where a small Skylander can access but a Giant can't fit. This will mean that if you play just with Giants you will miss out on some aspects of the game, along with treasure and hats in those areas.

Stats: The new and reposed normal Skylanders also introduce more incentives for their use with increased stats and new attacks.

Skylanders Giants was announced in February, which mirrors the approach for the first game. It seems to be likely that the game will also have a October release this year, as the original did in 2011. This may be brought forward a little depending on how many more figure packs they still have to release for the original game between now and then.

After that initial release, the first game made its figures available through a series of Figure Waves that included special edition versions, new Adventure Packs and new Characters. This, combined with stock levels, led to some figures being hard to find at retails.

Skylanders Giants is likely to continue the same approach to releasing the different characters. A basic set of new figures will be available at launch and then new characters will be added through the course of the year. It is likely that stock will be more forthcoming this time round with a greater understanding of the game's popularity.

For more news and behinds the scenes information on Skylanders Giants here are my Family Gamer TV episodes for the game:

You can support Andy by buying Skylanders Giants (Series 2)