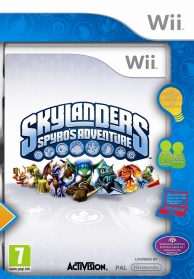 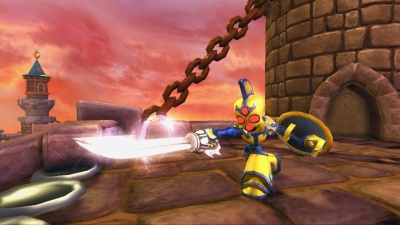 Skylanders: Spyro's Adventures isn't what I expected. Rather than a merchandise led game, it offers a fresh experience for both toy and game consumers and all in one collectible package.

Spyro used to be a big deal in the world of videogames, but then so did a lot of other backstaged characters. Skylanders: Spyro's Adventure dusts off the diminutive blue dragon and sets him (her?) at the head of an entirely new franchise.

Before you rush off to other more exciting games though, you need to know that there is more going on here than meets the eye. Hearing that there are a set of collectable toys to complement the game may not pique your excitement, or even the fact that these toys are built around technology so that each of them can be controlled in the game when placed upon the included magic portal peripheral.

The real excitement, for me at least, was the sheer imagination, quality and craftsmanship that each of these plastic characters has had lavished on it. Something about the close relationship between the toy and the videogame has made both parts richer. This is immediately evident in the toys which exude quality, in terms of the materials used, attention to detail and number of paint passes.

Now I have spent time with the finished product I appreciate my FGTV Studio Visit and can understand what goes into producing toys and games like this. It was a trip that substantially changed what I thought about the game and how I thought toys were created in general. Rather than focus groups or a committee, the toys here were headed up by I-Wei Huang, a videogame character designer who happened to also have a hobby of making characterful robots in his spare time. This, together with Studio Boss Paul Reiche's enthusiasm for modelling and painting characters - something that reflects his love of Dungeons and Dragons and Tolkien - created what must be a unique artisan approach to the creation of a mass produced toy.

Case in point is the way Toys for Bob tackled the thorny subject of including something in the offering for girls -- or as it turned out something for those who want to play as a female character. Pursuing this quickly got the response from their experienced toy-maker partners that "boys don't want to play as girls" and the "girls don't really want to play with these sorts of toys". It's the kind of institutional logic that leads to bizarre pink-ified gadgets, games and technology in general, and happily it was something the videogame creators were able to push back against.

What results is a set of female characters in the range of thirty (or so) who are not only interesting, self assured and complete mythical characters, but are also not pink. Now I have in them in hand I'm more than impressed with the girl figures as well as their on-screen counterparts -- in fact Stealth Elf is one of my current favourites.

The commitment to the toys is also matched in production values of the game itself. Hans Zimmer's score gives an added sense of gravitas to proceedings, as well as being a very nice peg to hang their as-important-as-a-movie-franchise hat on. With Toys for Bob at the helm the game also feels more genuine, growing out of a long running fascination of monsters for the studio.

The clever thing is that this character development is all stored in the toy monster rather than on the console.

This may all sound a little haphazard, but in fact there is a simplicity and coherence to it all. It is sold with three plastic monsters which determine the characters you have access to in the game. To play with one you simply place it on the included portal peripheral and (with no wires or delay) the monster appears on the screen ready to play. To switch or remove characters you simply take them off the Portal and confirm they are no longer playing.

The game itself is an action adventure experience where the players use their monsters shoot, hit and kill the enemy monsters as well as solving puzzles to progress. As they do this they earn experience and equipment that upgrades their monsters abilities.

The clever thing is that this character development is all stored in the toy monster rather than on the console. This not only simplifies the problematic saving process but makes the saves portable. Skylanders maximised this portability by letting you take your monster and play on any version of the game (Wii, 360, PS3, PC and 3DS).

To access more figures you can simply purchase more in store from the range of 32 characters. Buy a few together and you are provided with additional objects that, when on the portal, unlock specific adventures. Collect all the characters in a particular grouping (Fire, Water, Machines etc) and you are granted additional bonuses in-game. It's simpler than it sounds, although I did struggle to explain it to Loz on our Family Gamer Radio show.

If there is a weak point in all this it is the high bar set by the quality of the toy that the videogame itself struggles to meet. The game feels less revolutionary and not unlike similar action adventures. It could be criticised for not enabling players to take their own route in co-op via a split screen mode like that in Lego Starwars. Similarly next to the four player action of games like Castle Crashers, teaming up with only one friend can limit options in a family setting -- we will be resorting to turn taking I expect.

But these are relatively minor complaints compared to the benefits of the toy-as-save-file and general excitement of having such exquisitely crafted physical characters to carry around and remind you of your on-screen adventures. Paul Reiche Studio Head at Toys for Bob put it well when he lamented how "he remembered all the adventures he had with his toys, but that they didn't remember them". Lending the Skylanders monsters a memory impacts not only on the mechanics of the videogame but also the way the physical toys are played with - the magic works both ways.

There is enough depth for more mature gamers as well as the young of hardcore.

Having spent a lot of time with the game itself (and pawing over the physical toys) I've been enjoying building my collection and powering them up in the game. And yes, I say this as a 37 year old man (albeit one with misspent youth playing videogames and painting Warhammer/Dungeon and Dragons figures) but regardless, this is a mark of the level of artistic investment and sheer glee of the creators on display here.

It's something the whole family has got involved in. The big debate is which characters are the best to collect. We each have a different approach to this. The kids want the ones that have the best weapons, I'm after a collection that grants access to all areas in the game and my wife seems to be drawn to the characters that look the best.

Once you have settled on a collection, playing through the campaign mode enables you to collect money to unlock new attacks for each character (from a branching choice of about 10) as well as levelling up by dispatching enemies. This, along with the ability to find and wear stat enhancing hats takes your Skylanders Characters from their mediocre starting position to impressive adventuring machines.

In our family this has meant that we have each become quite protective over the characters we have been working on. The kids have taken to "customising" their toys to make sure it's clear which is theirs -- which involves indelible markers (and teeth marks for our youngest).

The kids have also played with the toys quite a lot on their own. Once game in particular has become a secondary obsession with a complex set of rules that seem to grow in complexity each time we play. It's what they call "Sky Chess" a sort of Checkers meets Skylanders meets Chess game where each Skylanders Character has special abilities and matched by particular chess pieces. Winged figures like Spyro can move two squares, figures with guns like Trigger Happy can eliminate another piece (in line of site) rather than moving and area effect characters like Eruptor can eliminate all piece around them in a two square radius. 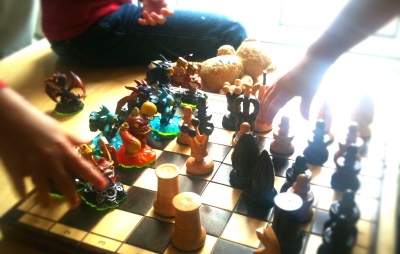 It's still early days in terms of seeing how long the kids will stay interested, but with new levels unlocked each time they buy a new character (and the price point a pocket money friendly 8 GBP) it seems like there is still plenty to discover. You can also purchase special adventure packs that come with other toys to put on the Portal that unlock new adventures. If that's not enough there are even Toys R Us exclusive packs (Darklight Crypt and Legendary packs) that provide access to limited edition characters with special abilities.

If this is as successful as I think it will be, I'd suggest buying any characters sooner rather than later as come Christmas time there will be an inflated second hand market for rare characters and retailers no doubt only selling Skylanders in expensive multi pack form -- just like we saw for the Wii.

What on the face of it looks like a toy tie-in game, actually turns out to be one of the most revolutionary experiences I've had with a game for a long time -- and all this without relying on novelty motion controls.

You can support Andy by buying Skylanders: Spyro's Adventure