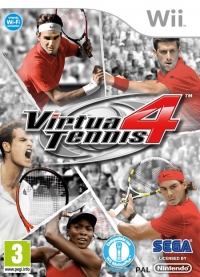 Virtua Tennis 4 motion controls create enjoyable family moments. These are hampered by the one-size-fits-all approach that hampers the Wii implementation because of the Kinect limitations (such as only supporting two players).

Virtua Tennis was a revolution in the arcades. Whereas previous tennis games had left all the work to the player, this game offered a simulation approach where you worked with your character to achieve the desired shot. Not only did the resulting gameplay look realistic, it also meant you could focus on your tactics and execution rather than wrestling with buttons and pixel perfect positioning.

It was converted to home consoles with some success, but recent years had seen the franchise pass to different developers and loose the focus and excitement of those early arcade games. At the same time, the Wii was in the ascendance and with it a requirement for games to embrace motion controls.

The result was Virtua Tennis 2009: a halfway house on the Wii that didn't excel at either life-like controls or the series call-sign tennis simulation. At the same time games like Wii-Sports (and later Wii-Sports Resort Table Tennis) were offering a one-to-one control mechanism that connected the player with the on screen action like never before. Then there was the excellent Grand Slam Tennis from EA that, although not perfect, combined MotionPlus controls and a fully featured tennis experience.

Virtua Tennis 4 is a return to form. But it's clear from the outset that this is the form of the arcade heyday rather than more recent gesture controlled iterations. Back in the hands of the original developers, and offering a comparable experience on Wii, 360 and PS3, Virtua Tennis again hits the tennis simulation notes that it made its name for.

For people looking for a hardcore tennis challenge Virtua Tennis more than holds its own against the likes of Top Spin. For me however, being more taken with realistic motion controls than the grind of hardcore tournament play, it's more of a mixed bag -- albeit one that is quite fascinating in terms of the current playing field of waggle and wave games.

Each of the different versions support their requisite motion control technology. Rather than integrate this into the main game though, this is found in a Motion Play mode. Here you can play singles or doubles games, or a couple of party games, using just the motion controller of your choice.

Come to the Wii though and expectations are a lot higher.

For Virtua Tennis 4 (Move) and Virtua Tennis 4 (Kinect), this feels appropriate and interesting. For the first time I could play tennis in high definition but controlling the game entirely with motions. With the PlayStation 3 Move controls the sense of one-to-one connection works well, and although the level of control available feels under whelming the mode is a success because of this novelty.

On the 360 too, the Kinect version of motion controls - where you basically use your arm as the racket - feels fresh and exuberant. Here there is visibly less control of your shot as Kinect doesn't see the rotation of your hand like Move or MotionPlus, but the sense of freedom you have moving round the room swinging your arm more than makes up for this.

Come to the Wii though and expectations are a lot higher, the novelty has worn off some time ago. There is the same first person view as the ball approaches and same visual representation of your racket (complete with the angle you are holding it at) but beyond that it feels a little basic. We have seen all this before, and executed much better.

Spending time with this mode on the Wii and you realise that direction of shot is not so much controlled by your motion, but when you strike the ball. Drop shots are exceedingly hard to pull of consistently, and I was generally disappointed that the controls were no more ambitious here than on the other versions. You see this not only in the adjunct nature of its delivery but in that it only supports 2 players in the Motion mode -- a limitation of the other systems rather than the Wii.

It makes me realise how good Grand Slam Tennis is on the Wii.

It shows just how much we have been spoilt having only one motion control system. Previously there hasn't been the temptation (as we see here) for developers to provide a one-size-fits all gesture control system. It makes me realise how good Grand Slam Tennis is on the Wii at building a game around the controls rather than seeing them as an afterthought.

What Virtua Tennis 4 does have to offer the Wii though is a proper arcade tennis game. In the same way that the Wii controls mirror the 360 and PS3, more happily the main game is also mirrored across all three platforms. Here Virtua Tennis is in much more familiar territory and offers a Tournament and Career mode that have been sadly lacking in other Wii tennis offerings.

In terms of choosing which Virtua Tennis game is best for your family, this is much easier than the Michael Jackson Experience dance game that offered different motion controls on each system. Here it comes down to which console you have access to and whether high definition visuals are important for you.

MotionPlus, Kinect and Move versions all offer a very similar tennis experience in terms of their controls - with the Wii and PS3 having a slight edge in terms of fidelity. My kids seemed to enjoy the combination of visuals and wand on the PS3, but were equally happy to settle for the Wii game.