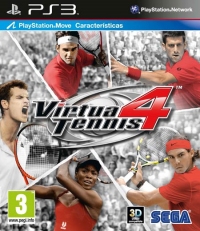 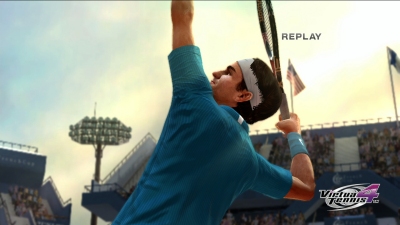 Virtua Tennis 4 has been released on PS3 Move and been provided for us to preview/review by the publisher.

"if i told you that the only improvements Virtua Tennis 4 can truthfully boast over its three year old predecessor (Virtua Tennis 2009) are slightly updated graphics and a motion-control-enabled arcade mode that plays only slightly better than Wii Sports Tennis (from 2006), then you might start to wonder what on earth the people at Sega have been playing at..."
- Tired Gamer (Fri, 24 Jun 2011)

"Virtua Tennis 4 offers an exuberant Kinect mode that initially impresses. However, because it's not integrated into the main game, and doesn't support more than two players it was more a novelty than ongoing interest..."
- Multiplayer Gamer (Wed, 11 May 2011)

"Virtua Tennis 4 creates a realistic tennis experience with its new PS3 Move controls. Even without being integrated into the main game and a lacklustre application of spin, the joy of real tennis is convincingly recreated for those with a genuine interest in the sport..."
- Sports Gamer (Mon, 11 Apr 2011)

Virtua Tennis 4 PS3 will be built around the new PlayStation Move controller and 3D display. Rather than their previous motion controlled effort from Virtua Tennis 2009 Wii, this is developed by the original Virtua Tennis Team.

The Move controls turn Virtua Tennis from a game about placement and timing into something much more nuanced. PlayStation Move makes it more about the angle of the racquet, the trajectory of swing, the spin and speed of the ball. Move can track both the fast and subtle movements of the controller allowing for pinpoint accuracy

Add to this the Virtua Tennis 4's support for 3D technology and you have an impressive package. With other features yet to be announced and the full player line-up to be revealed in the coming months, Virtua Tennis 4 will build interest as we approach its 2011 release date.

You can support Paul by buying Virtua Tennis 4