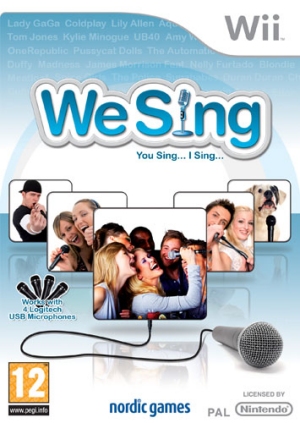 We Sing offers simultaneous four player singing along. Although bested by the fidelity and downloads of Lips and SingStar, it is the perfect game for friends and family.

Rhythm action games combine the enjoyment that comes from creating music with the challenge of video game scoring. The player is usually tasked with dancing on a mat, tapping a touch screen, pressing a button, singing into a mic or strumming a fake guitar controller in time with the music.

We Sing is unusual in that it enables four people to compete, each with their own microphone, on a variety of songs by the original artists. This moves it away from the novelty (and sound-alike singers) of Boogie and more towards Disney's happy go lucky franchise tie in Sing It.

As with any video karaoke game, players sing along to their chosen song using a USB microphone plugged into the console. Most standard USB mics can be used, and the game can be purchased in a bundle with two packed in. If you want to get up to four microphones however you need to get hold of a USB hub - this sounds more complicated and expensive than it is as they can be purchased in most computer stores.

The songs included on the disc are pretty middle of the road and should be familiar to most players with a few years under their belt. Highlights include Delilah, Take Me Home, I'd Do Anything for Love and Country Roads. There are also songs for younger players ranging from Coldplay, Amy Winehouse and the Kaiser Chiefs.

The game play itself revolves around singing the song close enough to the original tune. Stay on note and you can score more points and unlock bonuses. This aspect of the game is tailored towards younger players and is much more forgiving than either SingStar or Lips even on their easiest settings.

Although it sounds like a novelty, four player karaoke is actually a lot of fun. Seeing my family all stood up in front of the Wii singing their hearts our was a heartwarming moment. Singing is a strange activity to us because we simply don't do it together. Having the chance to hear my kids and other half's singing voice was actually quite moving - sounds sappy I grant you but it's true.

Because the game is based on three to four minute songs you can take a break between tracks as needed. Stopping mid song may result in loosing your current score but this isn't really a problem.

Although there are a strong set of songs on the disc, the games longevity is hampered by lack of a download service as provided by Lips and SingStar.

Novices (Toddlers and Juniors): The super easy difficulty level, bright safe visuals and general fun of singing as a family makes this a great game for younger players.

Intermediates (Parents and Seniors): More skilful players may prefer to opt for something with a little more challenge on the Wii such as Disney's SingIt, but that's not to say that there is plenty of fun to be had with We Sing - and of course that four player mode.

Experts (Students and Workers): Expert gamers will most likely prefer the challenge, downloadable songs and original videos of SingIt and Lips.

You can support Andy by buying We Sing