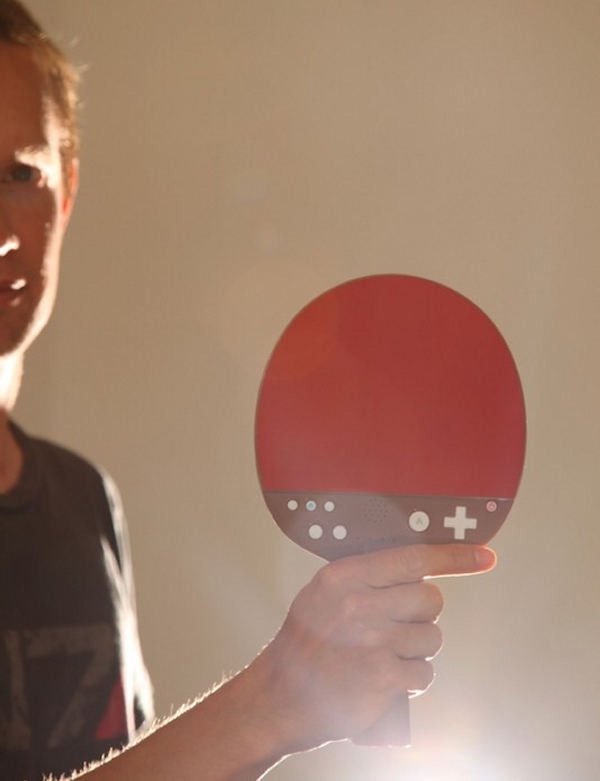 Bespoke Wii Table Tennis controller houses Wii-mote and MotionPlus in a beautiful weighted life size bat. It looks so good we spent half a day photographing it. Oh and it plays perfectly too.

I'm addicted to Wii-Sports Table Tennis and have played more than 200 hours. There is something about the simplicity of the controls and the accuracy of the simulation - and of course the fidelity of MotionPlus - that makes this a game I seem to be able to play endlessly.

I have worked my way through the ranks of competitors and after many hours of practice finally beat the champion. So now I'm plugging away to get my score over 1000. I was worried that it wouldn't have enough depth or longevity but I could have been more wrong. I even ended up writing a Table Tennis guide.

In the absence of Nintendo extending the experience I've been on a hunt for a way to improve the controller. This has taken me from pound shops to Game to Amazon and finally to China - all in search of the perfect bat, paddle or raquet.

While the strap on bats/paddles that are easy to come across at a novelty for a while - they were soon discarded because they were either clunky or unwieldy.

Then, I found a manufacturer in China who was prototyping a new Wii Bat. Not an extension to a Wii-mote but a replacement for it. This ingenious device not only houses the standard Wii controls in a Table Tennis Bat housing but also packs in MotionPlus.

After convincing them to send me one, and opening the jiffy bag, I was pleased to find the build quality was substantial. The bat had a similar weight distribution to its non-electronic counterpart. It came with a battery and charger and replicates all the features of Wii-mote and MotionPlus perfectly.

But most impressive it the added sense of connection it adds to Wii-Sports Table Tennis. Holding a controller so similar to the real thing - you could actually play real table tennis with it - you are instantly in the right frame of mind to engage wit the game.

The bat had a similar weight distribution to its non-electronic counterpart.

I loved the bat so much that I got a photographer friend of mine to take some shots of it. It's so new there were hardly any images of it available on the web. You can see for yourself how lifelike it is.

I'm now started to try out other games with the device - although admittedly it was a little odd playing Dead Space Extraction with a table tennis bat/paddle. Then there were games like roulette and bejeweled where the paddle doesn't have any place but for smacking yourself on the head after making a bad decision. Dead Rising seemed more appropriate but it wasn't long till I headed back for more Wii-Sports Table Tennis.

I'll keep you posted on plans for the device to be released world wide. Post your comments here to persuade the manufacturers this controller needs a global airing.

You can support Andy by buying Wii-Sports Table Tennis Bat