Other GamePeople columnists have reviewed this from their perspective - huh?:
Frugal Gamer (Wii)
Scared Gamer (PS3) 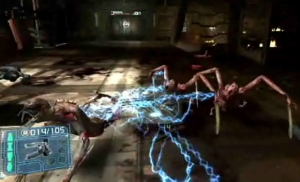 Dead Space: Extraction works its light gun shooter seam with finesse and style. Ingenius camera work, fast paced action and high fidelity controls tell a story as much as the exposition, and result in a game that gets it right in so many ways.

Dead Space: Extraction headlined Electronic Arts' charge on the Wii late last year, one of a bevy of big names the influential publisher sought to make work on Nintendo's incredibly popular console. It was also the most ridiculed on announcement, critics deriding the translation of a technically advanced shooter into graphically outdated light gun game.

But Visceral Games was steadfast in its convictions. The aim never was to simply create a light gun game. Extraction would have an arcade shooter's native easy fun, but combine it with the real horror of Dead Space. The developer argued that it could transfer the sweaty palmed creepiness of the third-person shooter into what it called a Guided First-person experience.

In truth, Visceral was never going to meet its own spin of surpassing a light gun label. Nonetheless, the studio and EA have been vindicated. Extraction is comfortably the best light gun game for the system and one of 2009's most enjoyable games, Wii-based or otherwise. More than that, it is a triumph that warrants its place alongside its technically superior predecessor.

Dead Space: Extraction's opening chapter bristles with so much excitement and uncertainty. With Extraction set before Dead Space, it makes sense to open at a point that explains the latter's events. So, I take control of a miner who helps to extract the treacherous marker from Aegis VII, the colony in which Dead Space's USS Ishimura got unstuck. The first 10 minutes are mostly narrative-drive, interspersed with toe-dips of tutorial, so I sit back and take in my surroundings.

It is a triumph that warrants its place alongside its technically superior predecessor.

What surprises most is how high the presentation remains. There's a drop obviously, but in actuality it doesn't detract like it should. Textures are reasonable - even when they're not the on-rails camera wisely avoids them. Lighting is used discerningly and the character models are detailed enough, with plenty of varied emotion on show. Extraction is actually quite attractive.

On reflection, it's arguable that this much is all but expected from an EA budget. The kicker then, indeed the sauce that brings this dish together, is the camera.

So many light gun games fail to employ a realistic-feeling camera despite their directed expewrience. Extraction absolutely nails it. As events predictably crumble from order into terror, panic, and screechy alien types, I watch as my character hurriedly glances left and right, as his vision bops while running, and as his eyes slowly, cautiously follow creatures moving in the distance.

I feel like I'm in this guy's head, or at least in his eyes, and I can read him from the camera. But the kicker within the kicker, the dash of chili in the sauce, is how Visceral used helmet mounted cameras to motion-capture other characters. The combination of the camera and the mo-cap makes for excellent, gripping animation and, more pertinently, a scary atmosphere. As my character darts focus from one slippery, gangly nasty to the other, it makes for an effective agent of horror.

So many light gun games fail to employ a realistic-feeling camera despite their directed expewrience. Extraction absolutely nails it.

Just as I settle into the rather prickly interior of this guy's head, everything gets psychological. Creatures appear then disappear. I see things that aren't there. Suddenly, I shoot a crewmate because I think he's a bit murderous. Then I'm left with my voices and visions. Help finally comes - dead. Shot in the head by a crewmate. So that's what it's like to get infected, then.

Unfortunately, the narrative never really surpasses the intensity and brutality of this opening, but it never dips far below it, either. The story stays engaging, though, primarily because of two reasons.

The first is the interrelationship of those in your party. You play as McNeill for the majority of the game, a detective investigating what went down in the opening chapter. As things get predictably messy, you shack up with three other characters: the rough and rugged Weller who's on staff at the Ishimura, the pragmatic Lexine who's the abandoned girlfriend of your deceased former avatar, and Eckhardt who's a rather insufferable higher-up with a District 9-worthy South African accent.

As the story unfolds, it's the oscillating dynamics between the four that keeps things interesting. Lexine pities the older, cordial Eckhardt, while Weller holds little trust for him, painting him as a religious zealot with an agenda. Weller has little time for anyone against him, actually, which leaves McNeill valiantly trying to keep things under control. The writing is not epic but certainly strong enough to keep the characters evolving, with the voice actors keeping them grounded while true to their very creepy new surroundings. By the end, you care if they make it out alive.

They play on guilt over selfish decisions, on lingering insecurities about the future.

While the central game shines, peripheral aspects are less well executed. Visceral has tried to keep narrative and background exploration separate, but I often miss out on enjoying cut scenes because I'm busy scanning for gear. Similarly, the audio log narrative elements delivered though the Wiimote only highlight how much that device can muffle audio.

All this and I've not mentioend the shooting. But this is almost a given, really. The dismemberment shtick remains, still feeling fairly unique a year after its appearance in Dead Space. The ghastly, awkward creatures are as difficult to deal with as ever, dodging shots relentlessly, crawling towards you until they're totally utterly dead. Psychological elements are played on through the frightened camera. There are set pieces and bosses that stand up as well as expected. And that's essentially it, because Extraction in its shooting is an effective, strong translation of its predecessor. Weapons like the pulse gun and the ripper stay true, while new weapons like the Arc Welder are fun novelties, this one shooting off a bolt of electricity to fry your beasts into oblivion with.

The choice to trigger secondary fire by twisting the Wiimote is inspired, the use of the Nunchuck to switch weapons simple.

The best translation, though, is in the controls. The choice to trigger secondary fire by twisting the Wiimote is inspired, the use of the Nunchuck to switch weapons simple. While Visceral has worked hard to give Extraction another dimension, it's the ease in understanding its controls that really solidifies its play and provides the base for an excellent pick-up-and-play co-operative experience.

For all its aspirations, Extraction is still a light gun game, though. But it has dashes here and there of something more interesting, and certainly serves to raise question as to why the on-rails first-person perspective isn't employed more by developers. It could have done with maybe even a bit more ambition with its story, and maybe a few more hours of play - at six hours long it's a good thing that it's come down in price since release. But thanks to really sensible design decisions around the camera and the controls, it defies its system to deliver enthralling atmosphere. With all the excitement of Dead Space 2, here's hoping Extraction is granted its own sequel too.


You can support Simon by buying Dead Space Extraction