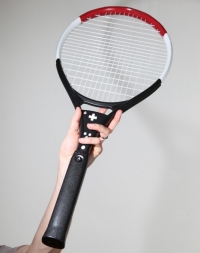 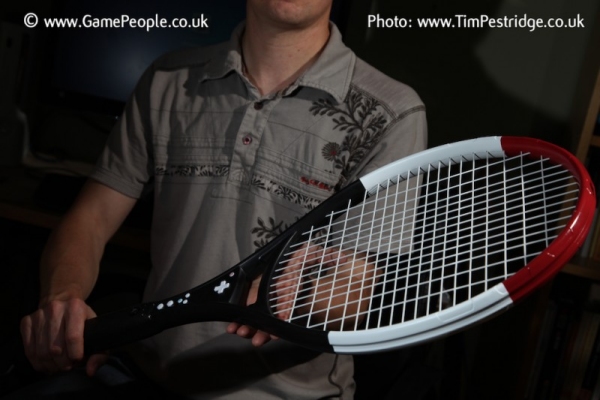 Wii-Sports Tennis is transformed into something very close to a real sport with this unique racquet controller that replaces the Wii-mote. Clever design and sensible weighting add realism to any Wii tennis game provided you have the space to really swing it about.

Since trying out the Wii Table Tennis Bat controller, I've been something of a convert to novelty Wii peripherals. I'm not talking about the various plastic attachments you can get to transform your Wii-mote into a misshapen Golf, Tennis or Baseball bats, but semi-professional bespoke controllers that have been designed with integral Wii-mote electronics.

The Chinese manufacturer who sent the Table Tennis bat must have been happy with my write up because soon after they sent over a Tennis racquet controller. Again the ingenious isn't like the hundreds of other plastic housings for the Wii-mote, it completely replaces it.

Putting the Tennis racquet controller through its paces soon proved that I needed much more space than I had available at home. I ended up persuading a local Gym to let me book one of their rooms for a few hours, and getting three friends along to see how it felt playing Wii-Sports Tennis with a real racquet.

Once there was enough space to really swing the racquet around, it proved its worth by added another layer of realism to Wii-Sports. Maybe it's because I haven't played the original Wii-Sports for a while, preferring as I have mentioned Wii-Sports Resort Table Tennis, but I was really impressed with the genuine sense of contact between racquet and ball it created.

The controller has the battery in the handle rather than the racquet head, which actually makes it better balanced that the Table Tennis bat version, which lacked a little heft in the handle. The Tennis racquet also benefits from its size because air resistance means you have to play with a more lifelike "stiff-wrist" stroke rather than the usual Wii-mote flicks.

In fact, it was this inability to use flicks to fool the game that turned out to be one of the most important features of the controller. This combines with the sensible weight distribution to create another fresh way of experiencing the Wii's motion controlled gameplay.

The device is well engineered and provides all the usual Wii-mote controls and buttons.

The device is well engineered and provides all the usual Wii-mote controls and buttons. You can plug a Nun-chuck into the bottom of the handle if you want to up the realism for games like Grand Slam Tennis. Although you have to develop a two handed technique for some shots because of the tethered Nun-chuck it still felt a lot closer to the real thing (ed: we'll get you a wireless Nun-chuck to try with it by sun down).

It even includes the infra-red pointing device right at the end of the racquet head. Again, a small detail but an essential one if you are going to use the racquet with a range of games on the Wii.

Like the Table Tennis bat I would have preferred a more realistic material to be used for the handle grip, and the strings are a fake grid of plastic rather than being actually strung. But these really are minor points on a prototype such as this.

These two controllers have pretty much transformed what I think about the Wii.

These two controllers have pretty much transformed what I think about the Wii. Whereas the novelty of waggle controls had really worn off, playing games with these devices feels totally different. I've ended up organising a little championship using the racquets back at the gym each week, and the competition is really heating up.

I'm also starting to investigate which other games these controllers may work for. Let me know if you have any suggestions.

You can support Andy by buying Wii-Sports Tennis Racket Controller