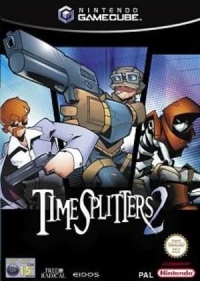 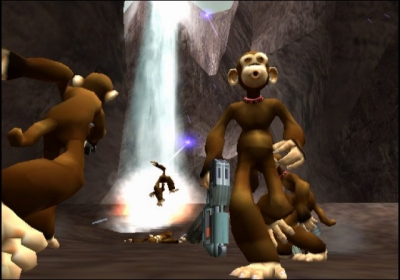 The Time Splitters team, Free Radical Design, hale from video game hallowed ground. Namely, from the developer who produced the break through first person shooter Golden Eye on the N64. This background set them in (more than) good stead to develop their own take on the genre, providing the same high quality experience.

First Person Shooters (FPS) present a game world from the perspective of the in game character. As graphics have improved these games are now able to render realistic renderings of the game world, endowing the player with an added sense of immersion. FPS games usually involve single or multiplayer player missions where one team (or individual) has to complete a particular objective before the other. That the action invariable involves a combination of fisticuffs and gun based fighting which then dictates the violent nature of these experiences. Beneath this harsh exterior though is often a intricate tactile game - and this is usually what drives the player.

TimeSplitters brings a sense of fun and frivolity to the genre. Whereas Golden Eye and Perfect Dark after it were, because of their licence, more serious experiences, TimeSplitters lets the cat out of the bag when it comes to creativity and fun. Whether it's the overly styled characters that range from busty bar maids to teddy bears, or the crazy modes that introduce herds of monkeys into the arena, there's plenty to entertain here.

The game behind the fun hasn't been neglected and provides a solid FPS experience in both the one player campaign and multiplayer modes. Additionally, TimeSplitters gained a reputation for being released early in the life of a particular console and to show the sort of graphical performance it was really capable of.

Whereas some games major on tactics and stealth, TimeSplitters places both feet in the fast action camp. If you have played FPS PC games, you should think of this more akin to a cartoony version of Quake than Counter Strike. The sense of speed as you dash around the levels is breath taking

Players are drawn to TimeSplitters more for the multiplayer fun and mayhem than the single player experience. As developers increasingly move to online co-operative and group play modes, TimeSplitters continues to stay true to its roots of four players huddled around a single screen.

Although many hard core players look down on these local play sessions, the increased size of the average TV combined with the benefit of sitting next to the person you are shooting makes a great case for them

The single player campaign mode can be worked through in hour long sessions. Anything less and you are in danger of not being able to get to an appropriate check point to save. It will take a good twenty hours to see it through.

Multiplayer games however really demand more time. It takes a group of players time to get used to the pace and controls of the game. It is also worth taking time to use the handicap system to even out the field.

Timesplitter's celebration of horror and boobs may make this less suitable for younger players. A variety of zombies, barmaids, sexy schoolgirls can be selected for play. That said, with an adult setting up each level you can avoid these characters and opt for the straight comedy of cuddly animals instead. What can't be avoided is the gun based violence. This reaches its height with the screams from victims of the flame thrower. Again something that needs consideration before younger players are let loose with the game.

Intermediate players who haven't spent a lot of time with twin stick controlled FPS's may need a little time to acclimatise. But once they have there is a lot of fun to be had here.

Experts will relish the harder settings on the campaign mode, and going head to head against each other in the turbo charged multiplayer.

You can support Andy by buying Time Splitters