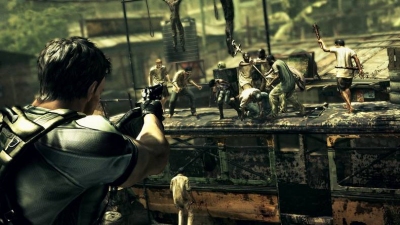 Resident Evil 5 is the latest in a prestigious line of horror games. The game continues the series' usual zombies, guns and running as well as the over the shoulder view popularised by the critically acclaimed Resident Evil 4.

Shooting games present a world in which the character must shoot their way out of dangerous situations. They provide the player with an array of weapons tailored to specific tasks. This unavoidably involves a combination of fisticuffs and gun based fighting that dictates the violent nature of these experiences. Beneath this harsh exterior though is often an intricate tactile game - and this is usually what drives the player.

Resident Evil 5 brings a focus on co-operative play to the series. With Resident Evil 4 being many people's top game of the last generation they had a lot resting on the sequel. They here take the characters and premise of the series and places it in an African setting.

The game takes a leaf out of the Left 4 Dead play book and structures itself around the concept of team work. Sharing supplies and munitions changes the every-man-for-himself nature of previous outings and pushes players into relying on each other.

The controls continue the restraint of the series. Some will find them a little fiddley to get to grips with - such as the inability to move and fire - but this is all art of the claustrophobic atmosphere the game creates.

The game is played over the shoulder of the on screen character and tasks the player with surviving waves of decaying zombies. The challenge here is more from the sheer numbers of the assailants, rather than their ability or speed. The slow plodding gate of endless numbers of enemies again adds to the sense of entrapment.

This action is interspersed with some quite astounding and filmic cut scenes. Boss battles also provide relief from the drowning in bodies and offer some more technical challenges.

Fans of the series or horror genre in general will find a high fidelity treat on offer here. The sense of tension, whilst not reaching the heights of Resident Evil 4, is still palpable. Wave after wave of mindless stumbling enemy slow overcomes the player by their sheer insistence.

As two players team up locally, or online against the hoards the tension of diminishing bullets and health packs soon starts to divide the party. Having just lend some bullets to my friend playing Shiva, I'm aghast they were then wasted gleefully dispatching some minor horrors. Striped of ammo, I'm left to face the hoard with just a knife. The tension and frustration the game generates is both fitting for it's style and great fun to experience.

Each chapter lasts a good thirty minutes, and doesn't lend itself to quick pick up and play sessions. Set aside an evening and you will get a lot more out of the game. Dropping out before completing a level means you start back at the last save point.

The certification and style of the game makes this one for grown ups, or at least older players who are used to the horror aesthetic. Novice players may find it takes them a while to get used to the exacting analogue stick movement and aiming controls - as to progress you need to master head shots.

Intermediates and experts will be wowed by the visuals and generally drawn into the experience. The focus on team play does stray from the hardcore audience a little, as it is a game that doesn't really sing until played by a duo. Resident Evil 4 may still be a better choice for purists, while this version suitable broadens the Resident Evil vision.

You can support Andy by buying Resident Evil 5