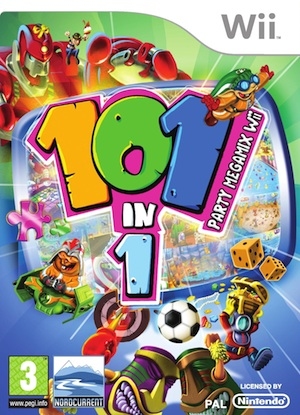 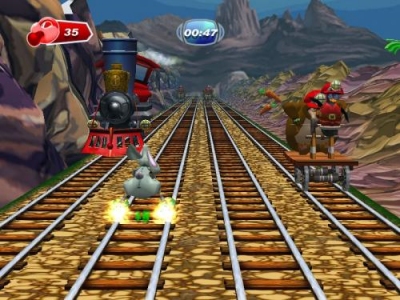 The words mini-game collection are heard all too often in connection with the Wii. The mix of the Wii's casual and party gamer focus, and the control system, makes it an ideal target for smaller and simpler games. Some, such as Wii Sports, Raving' Rabbids TV Party, and the Mario and Sonic Olympics games are great, combining innovative control and great multiplayer modes to make perfect modern party games. With so much strong competition in the market, any new mini-game collection needs to do something special to stand out from the crowd. The developers of 101-in-1 Party Megamix clearly hope that sheer quantity will be their selling point.

The game has three modes: TV Guide, Zapping and Marathon. In TV Guide Mode the games are divided into eight channels based on broad areas like Sports or Music. Most of the games, and some of the channels, start out locked, and you get access to them after playing the others. Zapping Mode gives you one long list of all the games that are currently unlocked, but playing them doesn't unlock any more. Finally Marathon Mode picks a random selection of games which you play against friends.

While there is a small amount of progression as you unlock the games, there is no real theme to the collection other than a taste for mildly surreal settings. It's full of games like whack-a-mole, but with alligators, or a running game where you are pursued by a T-Rex. If you've played Raving Rabbids then this wackiness might seem a bit familiar, and therein lies 101's major problem. It tries hard to be wacky and oddball, with strange cut-scenes and off-the-wall settings, but all that effort in thinking up so many different games means that none of them is particularly deep, the gameplay is hugely variable, and many are simply not engaging.

I found a distinct lack of real multiplayer games, with players having to take turns at a sizeable number of the games

There is a distinct lack of polish to many of the games, and stripped of the out-there situations there is very little imagination to most of the actual gameplay. It's clear that a fair amount of effort has gone into the artwork, the cut scenes, the settings, and the look of the game, which means it is visually striking and a bit different, but the interest is shallow and short lived for most of the games. 101-in-1 Party Megamix is supposed to be a party game, which makes it even more disappointing that I found a distinct lack of real multiplayer games, with players having to take turns at a sizeable number of the games. Instructions for many of the games are vague or just plain confusing, making them hard, not because they are actually tricky, but because you spend the first couple of attempts trying to work out what the devil you are actually supposed to be doing.

In spite of all this, 101-in-1 Party Megamix is not actually bad

In spite of all this, 101-in-1 Party Megamix is not actually bad, it just isn't very good. Some of the games are significantly better than others, with smarter and more involved gameplay or better multiplayer support. If the developers had concentrated their efforts on making these slicker rather than churning out the also-rans then the whole experience could have been significantly improved. There is definitely some fun to be had, and the silly scenarios might raise a smile, but even at a party most of the games will get old pretty fast. If you already have Raving' Rabbids TV Party or the Mario Olympics series then there is little reason to buy 101-in-1, and if you don't own them then they are a much better buy, with superior gameplay, production values, replay value and multi-player fun.

As is so often the case, more is not necessarily better. With so many high quality mini-game compilations available to Wii gamers, just putting 101 loosely linked games together doesn't automatically make you a contender. I can't help but think that if this had been a 50-in-1 Party Megamix, it might have been significantly better product.


You can support Luke by buying 101-in-1 Party Megamix