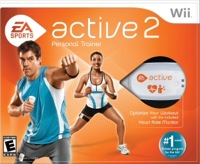 Other GamePeople columnists have reviewed this from their perspective - huh?:
Domestic Gamer (360)
Reporting Gamer (360) 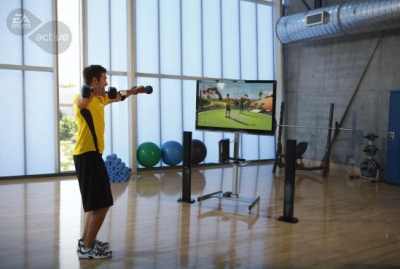 EA Sports Active 2 builds on the series' strengths as it loses the wires to create a comprehensive exercise program for even the most ardent of fitness fanatic. Although each version has its benefits, on Wii, PS3 or 360 this is most impressive.

For the last few years EA Sports Active has been stiff competition for Wii-Fit Plus, providing excellent workouts in your home. With version 2.0, EA have kept what worked in the original while significantly improving the experience.

Since the launch of Wii-Fit there have been a lot of different exercise games, but only EA Sports Active has really competed in terms of genuine fitness. Its use of the Wii-mote in the hand and the Nun-chuck in a leg strap, the addition of a resistance band, and well structured routines, made Sports Active workouts far more intense than those offered by Wii-Fit. It proved more effective for me so I was keen to put version 2.0 through its paces.

EA Sports Active 2.0 is more evolution than revolution, but that's a good thing. The basic format of Sports Active was very effective. After setting up a profile and designing your on-screen character, you sign up for a programme of either three or nine weeks (increased from the previous six). The programmes consist of workouts aimed at improving your general fitness and body condition, using a nice mix of traditional exercises and simple games that get you moving while having a bit of fun.

While the basic format of EA Sports Active remains, the mechanics have been hugely improved with the addition of new custom hardware. Using the Nun-chuck to monitor leg movements was a great idea but the connecting cable tethered your arm and leg, which was a tad frustrating if you were more than about five foot five tall, and meant you were constantly swapping controllers, putting the nun-chuck in or taking it out for each different exercise.

To solve these problems EA Sports Active 2.0 ships with custom hardware for monitoring your movements. The Wii version which I've been testing comes with sensors for your left arm and right leg. Combined with a Wii-mote for some exercises, this gives Sports Active three points of reference without any wires getting in the way of your exercise. It's also available for the XBox 360 and PS3, each version makes use of motion capture technology in a different way, but the fundamental game is the same.

On the whole I've found the motion sensors to be pretty accurate, and much better than the old Wii-mote and Nun-chuck approach. There are still times when it doesn't quite pick up all your movements and I had to play around with the position of the sensors, especially on the leg, but it mostly works really well.

It's also available for the XBox 360 and PS3, each version makes use of motion capture technology in a different way, but the fundamental game is the same.

With no annoying wires I could put much more effort into my workout and enjoy myself much more, safe in the knowledge I wasn't going to get tangled up. The workouts also flow much better, as there is no need to fiddle with the controllers between every exercise.

Because you no longer need to hold a Wii-mote in your hand all the time you can dump the rubber resistance band and use free-weights which I found much nicer. The resistance band was a good work around, but it can be fiddly to use at times and isn't enough of a challenge for many people.

As well as motion, the arm strap monitors your pulse, allowing Sports Active to more accurately estimate your calorie use and track how hard you are working. I tested it against a traditional chest strap heart monitor and the results were pretty close.

Again, it took me a bit of fiddling to get the arm band positioned correctly, but once there it worked a treat. It's nice being able to see how hard you are working right there on the screen. I found it an encouragement to push myself a bit harder to get up in to the higher training zones.

I tested it against a traditional chest strap heart monitor and the results were pretty close.

The final new feature which I think shows promise is the EA Sports Active Online community. You can create an account on EA's servers and upload all your training data to view online, share your progress with other Sports Active users, and get a bit of mutual support in the forums.

The website is in beta at the moment, so quite buggy, but hopefully those kinks will be worked out soon as I think it has serious potential to help people. Sticking with an exercise programme is much easier when you have a bit of support. The fact that this is also cross platform is another sensible move on EA's part. Those interested in these sorts of exercise plans really aren't concerned about which platform they are using as long as it works.

The Wii game wasn't without a few problems though. It supports the Wii Balance Board, but I've given up on it. When you are doing an activity that doesn't require it, the game complains when the board turns itself off due to inactivity. It even errors when you turn it back on. Load times are also annoyingly long for some of the games, especially during the warm-up, which just consists of your trainer taking you through some stretches, so I don't know why it needs to spend ten seconds or more loading each move.

EA Sports Active 2.0 is clearly the best exercise game available right now if you are serious about getting fit and losing weight.

But these really are just niggles. While EA Sports Active (Kinect) may offer a hands free experience as well as the PS3 version's downloadable content, on any platform this is clearly a very strong exercise game - particularly if you are serious about getting fit and losing weight.

They've kept what I liked about the original and drastically improved what didn't work to create a genuinely effective fitness game. It also clearly shows that EA are thinking about this as a continuing series, with more interesting ideas to come. I'm looking forward to EA Sports Active 2.1 already.


You can support Luke by buying EA Sports Active 2.0