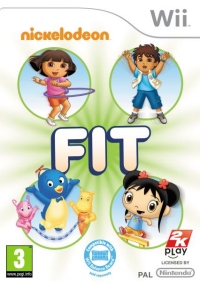 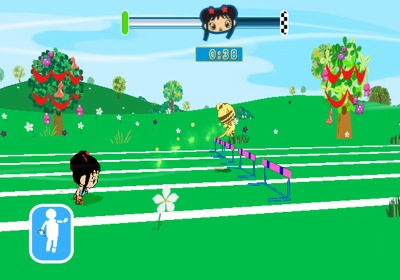 In a world of increasing childhood obesity and ill-health, a computer game might not sound like a solution, but Nickelodeon Fit Wii does a great job of making exercise fun for kids.

It's a depressing fact that obesity and health problems seem to be affecting ever younger children in the UK, so anything that helps them get active, especially if it makes it fun at the same time, is no bad thing. Nickelodeon Fit is an attempt to do just this with what could only be described as a Wii-Fit for Kids.

Nickelodeon is home to many well known children's cartoons like Dora the Explorer and Go Diego Go, and Nickelodeon Fit has these and more to encourage your kids to join in. If your kids enjoyed the shows they have a built-in incentive to get on and exercise with the game.

Each of the 30 mini-games feature characters faithfully reproduced in their original styles: so Dora and Diego are in simple 2D, while the Backyardians are 3D -- each matching their equivalent show. There's no naff attempt to jazz up the characters, and by remaining faithful they retain their original charm. It's clear that Nickelodeon didn't just hand this off to a game developer to rustle something up vaguely based on the original shows, they've made the most of the characters.

I've been a regular user of Wii Fit for some time, and a lot of the games in Nickelodeon Fit felt pretty familiar, just a bit simpler than the grown-ups' versions. Using just a single Wii Remote, and a Balance Board if you have one, you run, jump, skip, and push things around with the characters.

There is no pointing at the screen with the Wii Remote.

It's all very non-competitive way with lots of encouragement from the in-game characters. Within about ten minutes you'll have racked up shelves of medals and prizes which you can view in the virtual trophy room, a nice touch and a good way of showing your kids how well they are doing.

As well as keeping the games simple, the controls have been made easier. Almost unique among Wii games, there is no pointing at the screen with the Wii Remote, instead you hold it sideways and either tilt it or use the cross-pad and buttons to navigate around. While the Wii's pointing might seem easy enough for most adults, I've seen children, especially younger ones, really struggle to accurately point. I think kids will find it a lot easier to use.

The controls are also quite tolerant, you only need to get them roughly right to make it count. This is a definite advantage as smaller children don't have the fine control you need for many other active games (ed: like all Kinect dance games). Even I find some active games very fussy about making you do exactly the right motion at exactly the right moment, something that would be incredibly frustrating for a small child.

I'm concerned about the use of the BMI measure.

While the individual games are designed with fun rather than competition in mind, the overall feel is quite structured. This is very much like Wii Fit, with talk of routines, and exercises, rather than games. There is a parental area where you can setup routines, and even track your child's progress based on the intensity of the exercises they've been doing and their BMI (Body Mass Index). The exercises or games are all categorised according to their intensity so you can pick the ones you think will be right for them, but I can't imagine many kids having a problem with any of them. There are even stretching sessions to help you and your kids warm up before doing any exercises.

I'm not entirely convinced that it's a good thing to be teaching kids, especially quite young ones, that exercise is something that you should do in a formal and structured way. At that sort of age I think you are better off just getting them to play games and run around, not doing Exercises as part of Routines.

I'm especially concerned about the use of the BMI measure. BMI can be quite an unreliable measure of fitness in adults, in children it is of extremely questionable value. Nintendo got a lot of stick for the Wii Fit telling perfectly healthy kids that they were overweight because of the problems of using BMI to measure children. Thankfully all of the stats and tracking are hidden away in the parents section, so you can safely ignore them if you want.

While I'm not convinced that children really need to be doing formalised exercise like this, Nickelodeon Fit is sufficiently charming and fun that you don't really notice, and you and your kids can enjoy it as a bunch of entertaining little games.


You can support Luke by buying Nickelodeon Fit